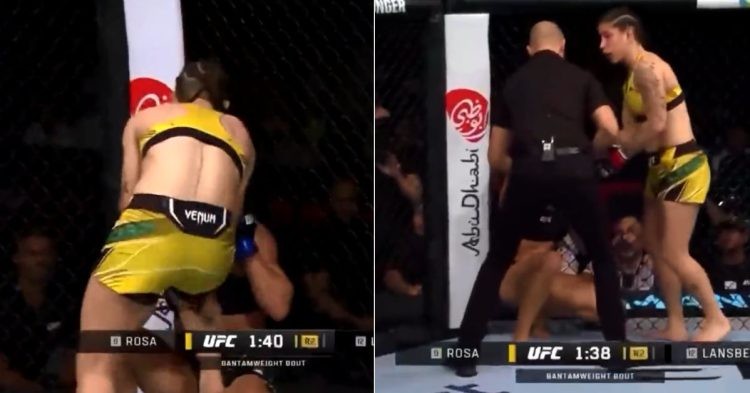 UFC 280 kicked off with Karol Rosa and Lina Lansberg opening the preliminary card in the UFC’s women’s bantamweight division. Lina Lansberg walked inside the Octagon with back-to-back losses to her name in hopes of jumping back to the winning column. Karol Rosa, on the other, stepped inside the cage with a loss over Sara McMann, which marked the first loss of her UFC career.

Criteria values the knockdown and striking damage in the first half of the round over Rosa’s top control and position advancement in the latter half.

40-year old Lina Lansberg had a good start to the fight, knocking down Karol Rosa in the very first round, brought with a vicious right hand. However, Rosa was able to recover quickly and made great use of her grappling to dominate Lansberg for the better part of the entire round.

The second round was no different, with Karol Rosa once again taking down Lina Lansberg. Some beautiful exchanges on the ground, and Rosa once again showed why she was the better fighter. However, it was at this point that during one of the grappling exchanges near the cage that Rosa landed a brutal illegal knee to the face.

The referee was quick to stop the fight and give the much-needed time-out to Lina Lansberg. The replay showed a perfectly illegal knee planted on Lina, who demanded the referee to cut a point. Needless to say, the referee deducted a point from Rosa.

Who won Karol Rosa vs Lina Lansberg at UFC 280?

The point deduction did not deter Karol Rosa, who became more aggressive as the fight progressed, and rightfully so. After everything was said and done, Rosa picked up a majority decision win over Lansberg at UFC 280.

The judges’ scorecard read, 29-27, 29-27, 28-28, for the winner by majority decision, Karol Rosa. With the victory, Rosa jumped back into the winning column and should find herself in the top 10 of the UFC’s bantamweight division.

What did you make of the illegal knee? Do you think the referee should have deducted points? Do let us know in the comments section.