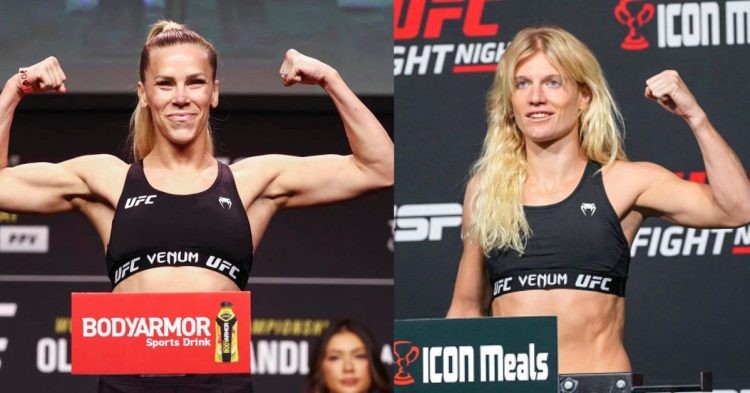 Katlyn Chookagian will take on Manon Fiorot on the main card of the UFC 280 this weekend. Chookagian is 18-4 as a professional fighter and has built a record of 11-4 in the UFC. She has faced a variety of opponents and some of the best in her division as well, for instance, Valentina Shevchenko.

On the other hand, Manon Fiorot is an elite striker but has 12 fewer professional fights than her opponent. Fiorot is 9-1 as a professional and has an unblemished record of 4-0 in the UFC with two knockouts and two decision wins.

This Saturday will allow her to face a top contender, and a dominant win over Chookagian can put her in the title frame in the future.

Chookagian has a fight style and skill set which puts her in the elite division of fighters. She is a very technical striker with a Muay Thai/kickboxing hybrid style, with incredible volume. She also has a huge gas tank, which she uses to pressure-fight her opponents.

Chookagian uses her size, skilled footwork, and relentless jab to keep opponents at bay. She also has pinpoint accuracy and often uses Thai clinch if any opponent gets closer. Her elbows and knees have proven to be very dangerous.

On the canvas, Chookagian has good wrestling too and she rarely spends much time while she is on the ground. Her takedown defense is on point too. However, the only weakness in her style is the lack of finishing ability but that has improved quite a lot.

Just like her opponent, Manon Fiorot is a vicious striker who uses a highly technical Muay Thai/kickboxing style. She is also relentless in offense and has precision from range. The only thing that separates her from Chookagian is her powerful strikes.

Fiorot has a full arsenal of sneaky and powerful strikes, all of which she uses with pinpoint precision and power. She uses very technical footwork as well. Her clinching game is also better than Chookagian, as Fiorot has shown much better techniques to transition into a clinch and land devastating knees and elbows from this position.

Fiorot can be called an upgraded Chookagian because of her improved fighting skills both on her feet and ground. As compared to Chookagian, her offensive wrestling has been proven to be effective. Her superb takedown defense has also bailed her out of danger.

While Fiorot has a much-improved fighting style than her opponent, Chookagian’s key to winning is her experience and elite cardio. Both of the fighters are very good on feet, however, with holes in their games respectively.

Fiorot has a slightly better chance on feet and their skill sets on the ground also match up. However, keeping up with Chookagian’s pace can be a difficult task for Fiorot, as she’ll have to look out not to get gassed out in the middle of the fight.

In conclusion, Fiorot can do everything that Chookagian can, but the power difference might be the biggest strength for Fiorot. Given Chookagain’s height and reach advantage, her strategy to keep Fiorot at range while she picks her apart can be a defining moment in this fight as well.

I believe Fiorot will match Chookagian for most of the fight and because of her more evolved game, she has a better chance of winning, especially with her offensive wrestling.