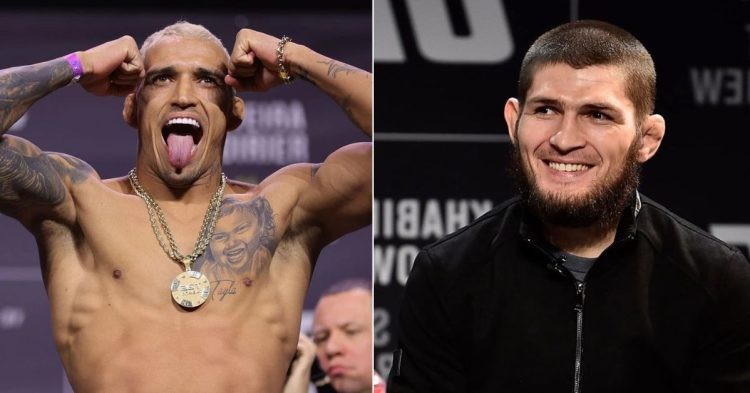 Charles Oliveira and Islam Makhachev will finally lock horns inside the UFC Octagon on October 22, inside Etihad Arena in Abu Dhabi for the vacant UFC lightweight championship. Both Oliveira and Makhachev are on an incredible winning streak and fans couldn’t have been more excited.

Ahead of the fight, Khabib Nurmagomedov took to social media to share his views on the match-up, promising a victory from Islam Makhachev at UFC 280.

Speaking to his Russian fans, Nurmagomedov said, “Just goosebumps from waiting. @islam_makhachev is coming out for this fight against the best fighter at the moment in UFC. Oliveira is the best fighter of 2022. He is one of the best, regardless of the weight category, and also goes on a 12-win streak in the UFC. This fight will answer all questions. Someone reads history, and someone writes it. Prepare your excuses, we aim to win Oliveira ahead of schedule InshaAllah.” (Translated from Russian)

There’s no denying the similarity in styles and match-making in Khabib Nurmagomedov vs Tony Ferguson and Charles Oliveira vs Islam Makhachev. Nurmagomedov has often been accused of evading a fight with Ferguson, who many believe had the submission skills to hand Khabib the first loss of his MMA career.

With Khabib retired, and Ferguson way past his prime, it’s safe to say that we might never see how that fight would have gone. However, many fans and probably even Khabib believes Charles Oliveira vs Islam Makhachev “will answer all questions”.

One can argue Oliveira is a better submission specialist than Tony Ferguson looking at his resume. Moreover, the Brazilian fighter makes great use of his grappling, unlike Ferguson who relied heavily on his stand-up skills. On the other hand, Islam and Khabib are very similar fighters, with a very similar style of fighting.

Nurmagomedov’s confidence in Islam Makhachev seems to be quite high with the Dagestani fighter even sending a reminder to Oliveira fans to prepare their “excuses” after Makhachev beats Charles at UFC 280.