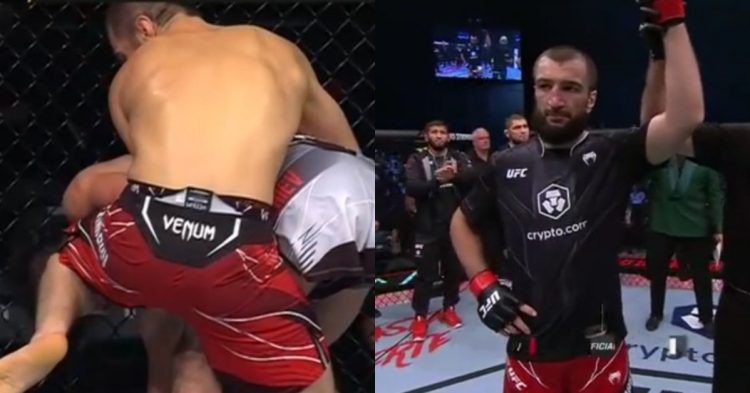 UFC 280 is officially underway and there is some fresh controversy brewing. In the preliminary card of the much-anticipated Pay Per View (PPV), Abubakar Nurmagomedov took on Gadzhi Omargadzhiev. Nurmagomedov won the fight via decision and improved his MMA record to 17-3-1.

But, during the fight, Nurmagomedov landed an illegal knee on Omargadzhiev. The incident took place when Gadzhi was on the ground. The ref pulled Abubakar to the side and gave him a stern warning. However, the same referee took a point away from Karol Rosa who landed an illegal knee in the opening fight of the event against Lina Lansberg.

It did not affect the fight much as Rosa won the fight regardless. However, the question arises, why did the referee not take away a point from Abubakar Nurmagomedov, who committed the same offense that Rosa did earlier? It was obviously a judgment call from the ref who did not deem the foul to be severe enough.

Abubakar Nurmagomedov gets it done in Abu Dhabi 🙌

The scorecard ultimately was 29-28, 30-27, and 29-28. If the referee took away a point from Nurmagomedov for his offense, it would have been a majority draw.

Aside from the fighters inside the Octagon, the referees have the toughest job in the sport. Whenever there is a scenario, where a referee has to take a judgment call, it always ends up with one side of the fanbase getting angry. It was not any different this time either. The UFC bantamweight champ Aljamain Sterling thinks the ref should have deducted a point.

But MMA journalist Aaron Bronsteter seemed to have a different reaction to the incident. In a tweet, he reminded the fans that it was only a judgment call from the ref. However, the fans think Abubakar got the advantage of having the surname of ‘Nurmagomedov.’ Abu is the cousin of lightweight GOAT Khabib Nurmagomedov.

Why wasn’t a point deducted?: Difference between that knee and the one that Lansberg absorbed is that the referee has to gauge whether the knee could damage the fighter where they are significantly disadvantaged going forward.

Why wasn’t a point deducted?: Difference between that knee and the one that Lansberg absorbed is that one is a Nurmagomedov and one is not.

Fixed it for ya

Still, I was expecting the ref to be more consistent than be case by case

What is your reaction to the matter? Do you think Abubakar Nurmagomedov should have been penalized? Let us know in the comments down below.