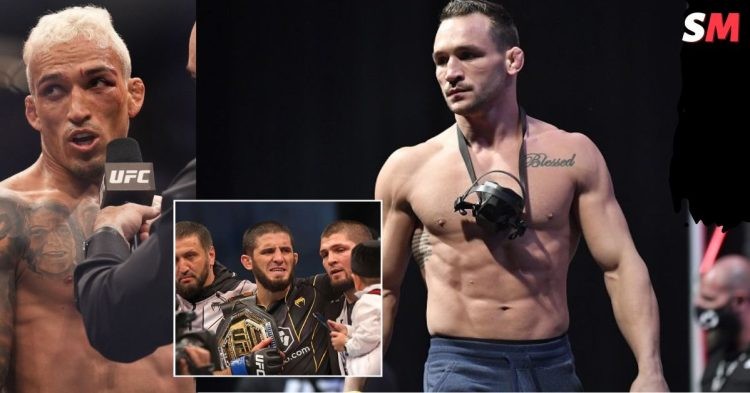 Michael Chandler wasn’t too high on Islam Makhachev’s skill set leading into UFC 280. The former lightweight title challenger opined on Makhachev’s lack of experience inside the cage and further criticized him for not fighting the absolute elites of the division.

However, at UFC 280, going against a seasoned fighter in the form of Charles Oliveira, Makhachev proved many people wrong with how he was able to dominate the Brazilian fighter in his successful pursuit of the lightweight gold.

“Islam is the real deal. I think when I was asked before about it, my answer, I stand behind it. Islam hadn’t fought anybody in that top-5. Not necessarily just that, but it was the fact that Charles had looked so dominant as well.” Chandler said.

Ahead of a possible #1 contender’s fight for the UFC’s lightweight strap against Dustin Poirier at UFC 281, Michael Chandler shared his thoughts on Charles Oliviera vs Islam Makhachev.

Islam Makhachev has called out Michael Chandler several times in the past, and the duo has gone back and forth on multiple occasions on social media. It remains to be seen whether they will share the UFC Octagon in the near future.

Michael Chandler has been at the receiving end of some harsh criticism after Makhachev’s win at UFC 280. The former lightweight title challenger opened up on the “hate” he has received from the Dagestani fans ever since Islam Makhachev became the new UFC lightweight champion.

There’s a real possibility that Michael Chandler and Islam Makhachev could soon share the UFC cage provided Chandler gets his hands raised at UFC 281 against Dustin Poirier. Islam Makhachev will likely take on featherweight champion Alexander Volkanovski next in a bid to secure the #1 spot on the UFC’s pound-for-pound rankings.

Meanwhile, Beneil Dariush could also be next for the title shot and a fight between Dariush against the winner of Poirier vs Chandler could also serve as a possible title eliminator. Will both these stalwarts ever share the UFC Octagon? Only time will tell.

Who Is the Player on the NBA Logo: Designer Alan Siegel Gives Some Interesting Details About Its History and Origin