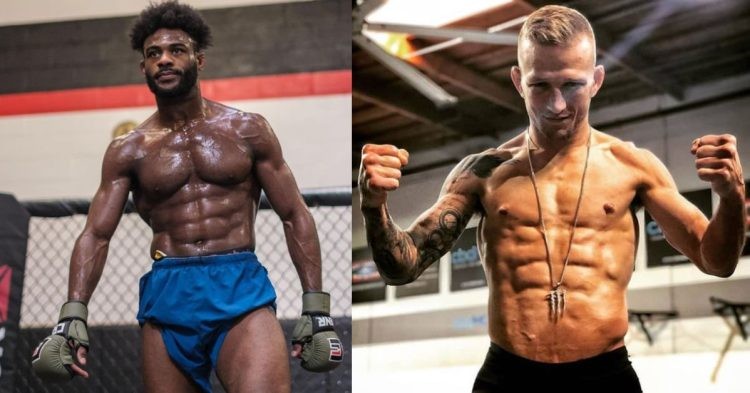 Current UFC bantamweight champion Aljamain Sterling has revealed how he will manage to cut more than 25lbs ahead of his fight against T.J. Dillashaw at UFC 280, after ballooning up to 160lbs.

Ahead of his October 22 co-headliner at Etihad Stadium in Abu Dhabi, Sterling says he’s in a ‘perfect spot’ in his weight-cut journey. In a recent video posted on his YouTube channel, Sterling shared details of his huge weight-cut method.

Worth mentioning that in the past Sterling has had trouble getting down to 135lbs. Although he has never missed weight but often gets pretty big in the offseason which makes the weight cut a major hassle for the champ.

Sterling’s opponent T.J. Dillashaw himself has had a long history with weight cuts. In an effort to get a second belt on his shoulder, Dillashaw dropped down a weight class and fought Henry Cejudo for the Flyweight title back in 2019. Getting down to 125lbs was never going to be an easy task for Dillashaw but somehow he made it.

Unfortunately, the fight didn’t go his way as he was knocked out in 32 seconds. But the biggest news came after the fight where Dillashaw was flagged by USADA for EPO and got suspended for two years. Dillashaw later revealed that because he pushed his body to extreme limits to make the 125lbs weight limit, he took EPO in an effort to rebuild blood cells,

This is Sterling’s second title defence, his first defence came against Petr Yan earlier this year. Dillashaw on the other hand hasn’t been the most active fighter, his last octagon appearance was against Cory Sandhagen in January of 2021. In closely contested bout, Dillashaw edged past Sandhagen on one of the judges scorecards, winning via split decision.

Dillashaw is widely considered as one of the greatest bantamweight’s of all time and thus Sterling will have to come up with his A game to defeat the former champ.

“He’s one of those guys who will do literally anything to win–and I mean anything, including all kinds of supplements, But I’ve put in the training and studied him, so I know what I’m up against. I know how I want to approach this fight,” Sterling says. “For me, it’s all about the man in the mirror. I need to do the things I’m capable of to win.”

Dillashaw has one of the fastest hands in the division, Sterling on the other hand is considered to be one of the best grapplers. While Dillashaw will like to keep this fight on the feet, it wouldn’t be surprising to see Sterling shooting for the takedowns early in the fight has he did against Yan.