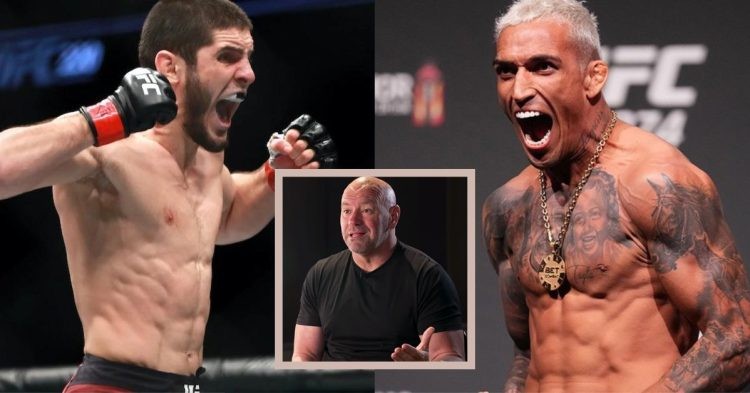 Dana White says Oliveira vs. Makhachev is trending more than Khabib vs. Gaethje

UFC 280 will feature one of the most anticipated fights when Charles Oliveira takes on Islam Makhachev for the vacant lightweight title this Saturday, Oct. 22, at Etihad Arena in Abu Dhabi.

This card is fully stacked with some of the biggest stars in the promotion and that is why this event is trending all over social media. According to UFC President Dana White, UFC 280 PPV buys are “trending off the chart.”

In a recent interview with BT Sport, White stated that this card is trending even more than the Khabib vs. Gaethje card of UFC 254. White said:

“Either Sunday or Monday was already trending to be bigger than Khabib vs. Gaethje. And it has been held the entire week. Yeah, and on social, this thing is performing off the charts on social media.”

UFC 254 featured Khabib’s retirement fight in the UFC against Gaethje, which generated a total of 675,000 PPV buys. Before UFC 254, White had claimed that Khabib’s last outing could break the promotion’s all-time PPV record set by Khabib Nurmagomedov and Conor McGregor at UFC 229 back in late 2018.

Nurmagomedov’s growing popularity and the event taking place in Abu Dhabi were the major factors behind White’s claims. However, UFC 254 could not even manage to bring half of the PPV buys Khabib Nurmagomedov was able to sell with his fight against Conor McGregor.

Oliveira has gained a lot of fame since his title win against Chandler. The Brazilian’s last outing with both Gaethje and Poirier had reportedly made more than 500K buys.

Meanwhile, Makhachev has also drawn much attention with his recent wins, and Khabib as his mentor, only adds more hype to the main event of UFC 280. That being said, some sources suggest, UFC 280 could generate more than $1 million in buys.

This PPV and the main event of Charles Oliveira vs. Islam Makhachev has been a hot topic since the time this fight was announced. The growing stardom and achievements of both fighters have made this a most watchable fight.

Some people even hailed the Brazilian as the greatest lightweight of all time. With his recent dominant wins over Ferguson, Chandler, Poirier, and Gaethje, Oliveira deserves the credit for being the best in his division.

Recently, Michael Bisping stated if Oliveira can beat Makhachev this weekend, he could replace Khabib’s place of the lightweight G.O.A.T. status. Makhachev’s grappling skill is one of the greatest in the UFC and is known to be second to his mentor, Nurmagomedov.