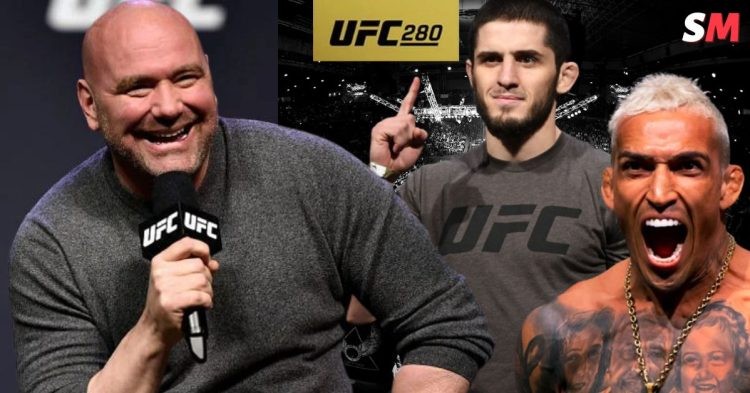 To no surprise, UFC President Dana White has given us an insight into how UFC 280 is faring in terms of trends and popularity. And just as you would expect, it is crushing it!

In a recent conversation with Robbie Fox of Barstool Sports, UFC President Dana White revealed that UFC 280 has been trending since UFC Vegas 62 even took place. A card that is packed from top to bottom, it is no surprise that the anticipation for UFC 280 is at an all-time high.

“This thing is trending off the charts. It actually started on Saturday. My Analytics guy hit me up and said, ‘we are crushing this event’ on pre-buys on Saturday, how about that!” Dana White said.

“You couldn’t ask for a better main event. Two of the baddest dudes in the world in that weight class, in their prime, facing off for the title.” White added.

UFC 280 promises to be one of the most exciting events of this year. While the main event will witness Oliveira and Makhachev fight for the vacant lightweight gold, the co-main event will be historic for its own reasons. TJ Dillashaw will return to the ring after more than a year to take on Aljamain Sterling for the UFC’s bantamweight gold.

Meanwhile, Sean O’Malley will step up to take on Petr Yan, who is currently ranked #1 in the UFC’s bantamweight division. Beneil Dariush will also make his way to the Octagon to take on Mateusz Gamrot, while Katlyn Chookagian will look to book herself a title shot as she takes on Manon Fiorot.

You will have to make sure you are an ESPN+ subscriber to buy UFC 280 PPV. You can order the UFC PPV directly from UFC’s official website as well. New subscribers can pay a cumulative total of $99.99 to access UFC 280 PPV and an annual ESPN+ subscription.

Meanwhile, existing ESPN+ subscribers will have to pay $74.99 to witness Charles Oliveira vs Islam Makhachev live on PPV.

There’s every possibility that UFC 280 could become the first PPV in quite some time to cross 1 million PPV buys. There’s no denying that the card has all the big names to cross the magic figures. Oliveira’s last outing with both Gaethje and Poirier had reportedly made more than 500,000 buys.

Considering the star power of Islam Makhacheb under Khabib Nurmagomedov, and Charles Oliveira‘s surging popularity added with other popular names on the card, there’s no denying UFC 280 PPV Buys could cross 1 million.

Will Draymond Green and Jordan Poole Play Together Tonight at Golden State Warriors vs LA Lakers?