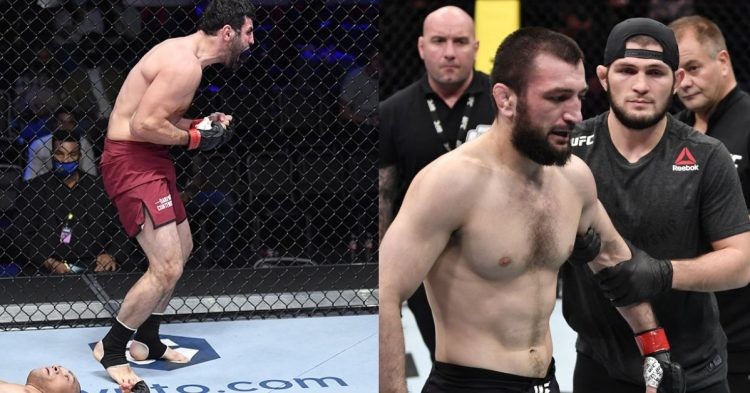 UFC 280 will feature a Welterweight fight between Abubakar Nurmagomedov vs Gadzhi Omargadzhiev as the main event that will take place on October 22 at the Yas Island in Abu Dhabi.

Taking place on what is being called not only one of the most stacked cards of this year, but maybe one of the best cards of all time, the fight is a preliminary bout which will take place on the prelims prior to the main card.

A number of incredible stylistic matchups can be seen on the UFC 280 card, which not only include strikers testing themselves, but also multiple grappling experts going against each other trying to find out who’s the better specialist.

One half of the fight being talked about here is the three time Combat Sambo World Championship bronze medalist, the former Russian Combat Sambo Champion, and currently fighting under the UFC, Abubakar Nurmagomedov. Sporting a predominantly wrestling oriented style of fighting, Nurmagomedov has the trademark Dagestani wrestling which he has used to his advantage so far in his career.

The other half of the bout is Russian fighter Gadzhi Omargadzhiev. Coming off of a loss to Caio Borralho, Omargadzhiev has had a relatively good career. That one loss is the only loss on his record.

Considering Nurmagomedov’s primary line of offence is his wrestling, his game plan would be pretty evident. His ground game has been found to be lacking though in multiple areas, with him finding it difficult to transition a position into a threatening one. He’s been on something of a rocky run when it comes to his last few performances, which included multiple losses and a draw. Fighting out of MMA factory, Omargadzhiev has an all round mixed martial arts skillset through which he can threaten Nurmagomedov in the areas he’s weak.

Also Read: How are Abubakar Nurmagomedov and Khabib are related?

Even after Abubakar’s wrestling background, he’s been something of an average wrestler so far who cannot find the right openings, and given his rocky run recently, he is sure to have some issues dealing with the ground game.