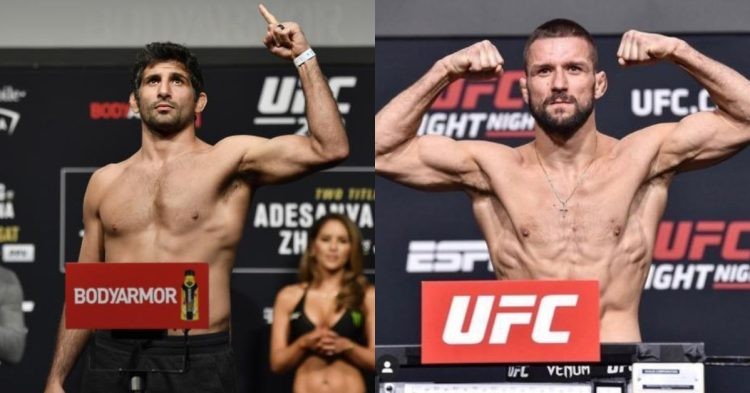 UFC 280 Main Card will feature a potential number one lightweight contender fight between Beneil Dariush and Mateusz Gamrot at the Etihad Arena in Abu Dhabi.

Considering their recent record, Dariush is on a highly impressive seven-fight win streak which includes some crazy knockout victories. Gamrot on the other hand has gone undefeated in his last four octagon appearances after suffering a split decision loss to Guram Kutealadze on his UFC debut.

Lightweight for years now has been one of the most exciting and deepest divisions in the UFC, on any given day, anyone in the top 10 could win the lightweight title. This is why Dariush vs Gamrot square off at UFC 280. Both of these fighters have incredibly complete mixed martial art game as they are legitimate threats standing up and even more so on the ground.

The placing of this fight is curious as well, as the main event will feature the lightweight title. So, perhaps the UFC is hinting at a number-one contender fight by having two highly-ranked lightweights fight it out on the main card.

Both fighters use their striking in a way that helps them empower their grappling game. Gamrot is much more traditional with his striking while Dariush can get more reckless and throw various unique combinations. According to some stats. Dariush lands 3.80 strikes per minute compared to Gamrot’s 3.54. However, Gamrot is slightly more accurate than Dariush as he lands 52% of his strikes to Dariush’s 49%.

Without a doubt Dariush possesses more power with his strikes, having KO’d or hurt several of his opponent in the UFC, giving him the striking advantage in this fight. Dariush is a high-level BJJ black belt but it’s simply impossible to ignore Gamrot’s wrestling considering his past performances. The pace and pressure Gamrot exerts on his opponents usually breaks them down and slow them enough to either secure takedowns or land big strikes.

Dariush in the past has struggled with some cardio issues, so if Gamrot can expose that weakness early on, he might get his hand raised. This is certainly going to be a tough fight for both of them as their fighting styles are pretty similar and don’t offer much holes. This is certainly going to be a very technical fight and the winner should be fighting for the title soon.