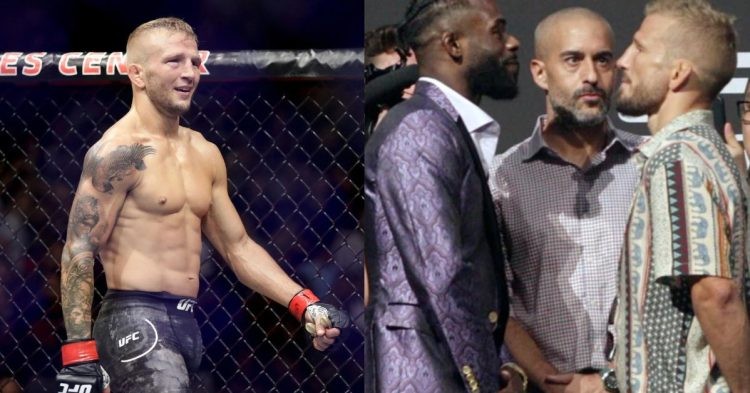 UFC 280 features the much-anticipated title fight between Aljamain Sterling and TJ Dillashaw. After two fights against Petr Yan, Sterling will be taking on the former bantamweight champion, TJ Dillashaw.

TJ Dillashaw is undoubtedly one of the greatest bantamweights of all time. And he can solidfy as the greatest ever if he beats Sterling at Etihad Arena, Abu Dhabi. But Sterling is not going to be an easy fight for the former champion.

After his win over Petr Yan in the rematch, Aljamain Sterling has shut down a lot of critics and proved he deserves to be at the top. But, can he beat TJ Dillashaw, who is the most experienced fighter in the division right now after Dominick Cruz when it comes to title fights.

Is Aljamain Sterling a better wrestler than TJ Dillashaw?

Aljamain Sterling calls himself the human backpack. He is one of the best wrestlers in the division. He proved that in the rematch against Petr Yan.

Sterling did not mind winning rounds against Yan by taking him down and controlling Yan on the ground. And even though Sterling is claiming that he will finish Dillashaw fans might see the champion dominating Dillashaw on the ground for the majority of the fight.

TJ Dillashaw has always been one of the strongest wrestlers in the division. However, he is 38 years old now and has suffered many injuries in the last few years. It should also be noted that Dillashaw has been extremely inactive since his loss to Henry Cejudo due to suspension and injuries.

In his last fight against Cory Sandhagen, Dillashaw blew his knee out during a grappling exchange and almost lost the fight. So it won’t be surprising to see Sterling winning the wrestling exchanges if the fight goes to later rounds. However, Diallshaw should be able to defend the takedowns early on and force Aljo into a striking battle.

Many fans believe that TJ Dillashaw’s recent injuries and his inactivity will play a huge factor in the outcome of the title fight. Dillashaw was suspended for 2 years after he tested positive for EPO.

The former champion made his comeback in 2021 and secured a close decision win against Core Sandhagen. However, he suffered a knee injury and a nasty cut on his eye during that fight.

A lot of factors stack against TJ Dillashaw. However, he certainly looked good and durable in his last fight against Sandhagen. Despite, blowing his knee out in the first round.

The biggest concern for Dillashaw in this fight is going to be Sterling’s wrestling. If TJ can stop those early takedowns and force him into a striking battle then he will have a clear edge over the current champion.

The damage Cory Sandhagen did with his striking against TJ Dillashaw is something Sterling won’t be able to replicate. The most probable way for Sterling to win is dominate TJ on the ground and get a decision win. It won’t be a surprise if he gets a submission early in the fight.

However, Dillashaw has shown good takedown defense throughout his career. He has more 5 round experience than the champion. And Dillashaw is likely to win this fight via decision.