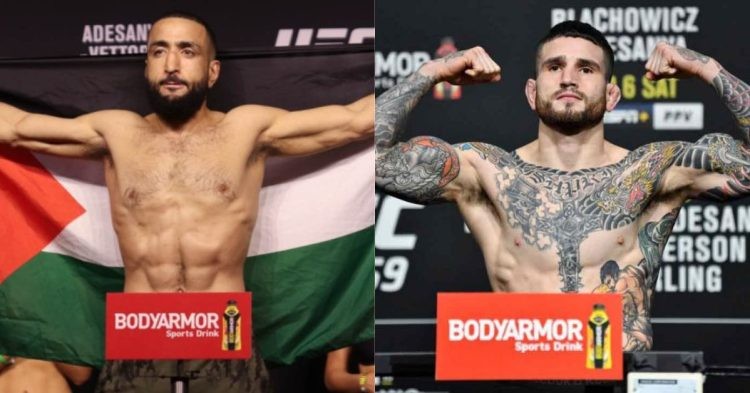 UFC 280: Oliveira vs Makhachev is all set to go down this weekend on October 22nd at the Eithad Arena in Saudi Arabia, UAE. Belal Muhammad will return to action as he takes on rising welterweight contender Sean Brady in a three-round bout.

Two unbeaten streaks enter, only one will leave 🤜🤛@BullyB170 vs @SeanBradyMMA

This matchup will headline the prelims of UFC 280 and is one of the most exciting clashes of the card as both the fighters are in great form and it would be interesting to see who comes out on top. Taking a look at their recent fights, Belal Muhammad picked up an impressive unanimous decision win over Vicente Luque back in April this year.

Meanwhile, Sean Brady extended his perfect record to 15-0 after outclassing Michael Chiesa throughout the three rounds in his last fight. It is needless to say that this is a crucial matchup as a win for either welterweight would bring them one step closer to the title contention.

As we move ahead, let’s compare the stats of the two welterweights that will collide at UFC 280.

Who is the better wrestler between Belal Muhammad and Sean Brady?

Fight fans can expect a highly competitive grappling showdown between Belal Muhammad and Sean Brady at UFC 280 as both the welterweights are highly skilled wrestlers.

If we compare the grappling skills of both fighters on the basis of stats, Brady has an edge as he has a much higher takedown average and accuracy. But it is to be noted that Belal has fought in the UFC a lot more than Sean and hence he is much more experienced than the latter.

Both fighters like to engage in clinches and find the perfect opportunity to take their opponents down. Sean Brady showed his potential and skill on the ground as he dominated Michael Chiesa who is a submission specialist.

On the other hand, Belal Muhammad ragdolled both Vicente Luque and Stephen Thompson on the ground and grinded out two big wins in his recent matchups. With that being said, Belal’s experience of overcoming tough situations and his recent training with Khabib Nurmagomedov might end up becoming the difference maker and help him outclass Brady on the ground.

If both the fighters fail to land takedowns then Belal could still have the advantage in this fight. Given the fact that he has great cardio and it will play a pivotal role as the fight progresses in a striking battle.

Besides, Remember the Name’s striking has been getting better every single time he steps inside the octagon. So fans can expect Belal to get his hands raised by the referee at UFC 280.