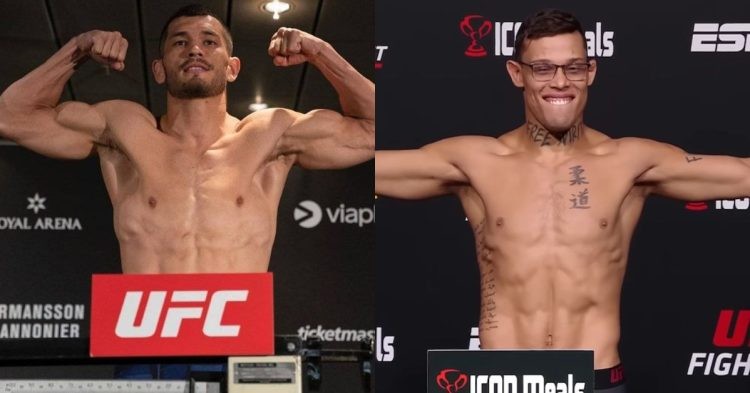 UFC 280: Oliveira vs Makhachev is all set to take place this weekend on October 22nd at the Etihad Arena in Abu Dhabi, UAE. This PPV features two mouth watering title fights and several exciting matchups that will keep the viewers intrigued throughout the fight card.

Even the prelims are stacked 🍿

One such matchup is the three round middleweight bout between Makhmud Muradov and Caio Borralho that is scheduled to take place on the prelims of the PPV. Leading into this fight, Makhmud is on the back off a brutal submission loss in his last fight.

Gerald Meerschaert submitted Makhmud via rear naked choke in the second round to hand him his first UFC loss. On the other hand, Borallho outclassed Armen Petrosyan throughout the three rounds to pick his second win in the UFC.

It is needless to say that Caio will try to add a big win this weekend and maintain his undefeated streak in the promotion. As we move ahead, let’s compare the stats of the two middleweight’s that will collide against each other at UFC 280.

Makhmud Muradov has shown in the past that he has great knockout power and can switch the lights out of any opponent with a single blow. Muradov is a lethal striker and fans can expect an entertaining matchup as the 32-year old middleweight will look for a early knockout win.

However, it wouldn’t be easy for Makhmud to knockout Caio Borralho as the latter is a very tricky striker with great grappling skills. After overextending in his last fight which caused Makhmud a submission loss, Caio Borralho would try to expose Muradov’s weak ground game in this matchup.

If Borralho stays patient and avoids getting into a striking battle then he could find openings to land takedowns and control his opponent. Moreover, if Makhmud tries to close the distance then the latter could engage in clinches which could prove crucial if the fight goes to the distance.

Makhmud Muradov is a very dangerous fighter and cannot rule him out as he has the tools to finish the fight at any given moment. However, Caio Borralho is well rounded in all departments and holds the edge to dominate this three contest.

Unless Muradov stuffs Borralho’s takedown attempts then the likelihood of him winning is very low. So one can expect Caio Borralho to pick up his third UFC win this weekend at UFC 280.