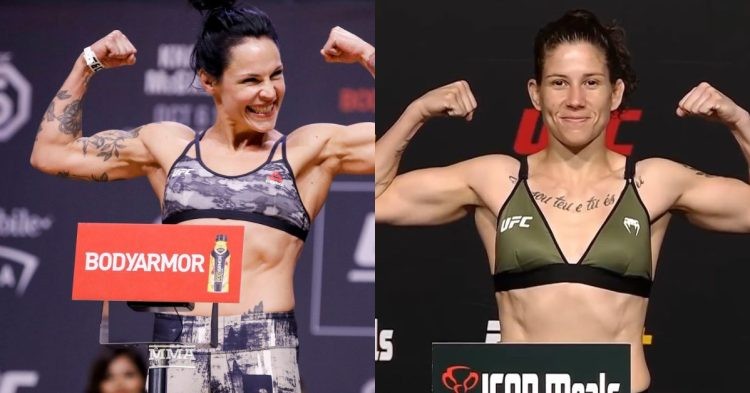 Karol Rosa and Lina Lansberg will start the prelims of UFC 280 with an exciting bantamweight bout. Rosa is coming off a unanimous decision loss to Sara McMann and has a professional record of 15-4.

This defeat also put an end to her six-fight winning streak, but this weekend she has the chance to get back in the win column. She stands two inches shorter than Lina but has a two-inch reach advantage.

Meanwhile, Lansberg might be at the end of her career but she won’t likely go down without a fight as this fight may go the distance. The veteran, Lansberg is the second-oldest female fighter in the UFC, while her opponent is 13 years older than her.

Karol Rosa (15-4) started with a phenomenal debut in the promotion and carried her to a perfect 4-0 record. She has impressive wins including a decision over Bethe Correia in her farewell fight. That is until Sara McMann came and broke Rosa’s perfect record. McMann out-wrestled the Brazilian to snap her six-fight win streak.

Rosa has a sound striking and her cardio is also up to the mark. On her feet, she tends to use good footwork and is also relentless with her pressure-fight kickboxing skills. Rosa also has a better ground game than Lansberg in this bout.

On the other hand, Lina Lansberg is a veteran in the promotion and has a professional record of 10-6. The ‘Elbow Queen’ made her debut in the UFC against Cris Cyborg at UFC Fight Night: Cyborg vs. Lansberg back in 2016.

However, Lina lost the bout via stoppage but bounced back with a win in her next fight. With back-and-forth wins and losses, Lansberg improved her UFC record to 4-5. She enters the cage amid a two-fight losing streak that’s seen her drop decisions to Sara McMann and Pannie Kianzad.

Lansberg’s age might be a problem in this bout as she will face a much younger and more agile fighter. Her grappling is the only part where she seems to be better than her opponent, but it is also possible that she might gas out trying to keep up with Rosa.

Lansberg doesn’t have much luck winning this bout. Not only is Rosa 13 years younger, but she also lands more than twice as many significant strikes per minute and has the technical kickboxing skills to stop her on her feet.

Even though Lansberg has good wrestling which has bailed her out of danger before, she’s nowhere near the level of Sara McMann, and Rosa also has got some ground game of her own.

Given her age, Lansberg can’t keep up with Rosa’s pace and is likely to get hurt if she tries to stand and trade shots with Rosa. If this fight goes the distance, I believe Rosa will outpoint Lansberg and get a clear decision win.