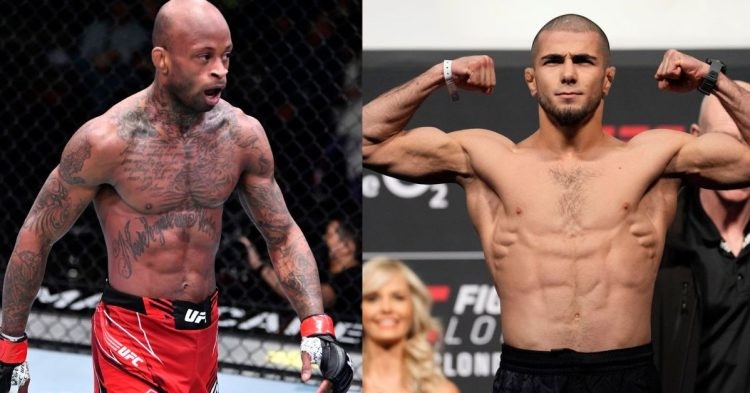 Malcolm Gordon vs. Muhammad Mokaev aimed for the prelims of UFC 280

Muhammad Mokaev will take on Malcolm Gordon in an exciting flyweight bout under the preliminary card on Saturday at UFC 280.

Mokaev is a 22-year old prospect quickly rising through the ranks while showcasing dominant performances in the octagon. ‘The Punisher’ is undefeated in the promotion and has a record of 8-0. He enters the fight as a huge betting favorite and has a lot of hype behind him.

Meanwhile, Gordon began his UFC journey with 0-2, but has since improved his resume to a 2-2 record.  This is a highly exciting matchup between two prospects who usually don’t rely on decision victories.

Muhammad Mokaev is one of the most electrifying fighters currently in the UFC. This young man is very talented and lives up to the hype that he brings. Even though he is young and new to the promotion, some people see Mokaev as a future champion for his potential and elite skills.

In the striking department, Mokaev is fast, powerful, and uses a variety of strikes that makes him very unpredictable. Mokaev’s ground game is also to the point and given his elite athleticism, Mokaev uses his dangerous offense to pressurize his opponents.

Mokaev employs a mix of slick striking with frequent takedowns, as he is aware that he can wrestle at any moment he chooses, as he has shown in his previous fight. On the ground, Mokaev seeks to find a controlling position and hunts for a submission but also resets his grappling if he senses danger.

On the other hand, Malcolm Gordon is also dangerous both on feet and ground, given he has 5 of his 14 wins by TKO/KO, and 6 of 14 by submission. On feet, Gordon is agile and uses powerful strikes to stun his opponents. However, he has holes in his wrestling and also when he strikes, he tends to focus on the standup game alone rather than going for a takedown.

This separates him from Mokaev, as the younger fighter is extremely talented at finding openings while shooting in on takedowns. Apart from grappling, Gordon also has a poor striking defense and struggled against average strikers in his past fights.

To win this fight, Gordon needs to improve his grappling a lot against an elite fighter like Mokaev. Gordon also has a poor takedown defense even though he has many holes in his game, he has the skills to finish this fight.

Both fighters have similar height and reach but Mokaev is significantly better than Gordon as he is a much advanced fighter over all. Mokaev’s dangerous skills have made him a massive betting favorite against his opponent. However, Gordon should not be underestimated as he can be an equal threat on feet.

Despite that, Mokaev’s elite skills set him apart from his opponent. Gordon has a significant defense flaws both on feet and ground, and given the nature of the fighters, this fight will only end with a stoppage.

I expect Mokaev to win quite quickly given his flawless skills, and judging by his past fights, this round will end in the early round.