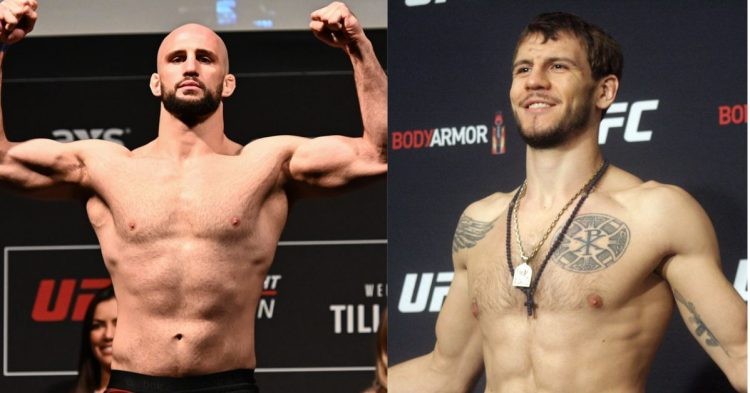 The highly anticipated UFC 280: Oliveira vs Makhachev will begin with its proceedings this weekend on October 22nd at the Etihad Arena in Saudi Arabia, UAE. This PPV features a stacked lineup from the main card to the prelims hence it is needless to say that fans will be thoroughly entertained from start to finish.

One of the fights that has the potential to deliver and excite the viewers is the prelims matchup between Volkan Oezdemir and Nikita Krylov. This bout is scheduled for three rounds and will take place in the light heavyweight division.

Leading into this bout, Volkan Oezdemir snapped his two-fight losing skid by defeating Paul Craig via unanimous decision. On the other hand, Nikita Krylov picked up a sensational knockout win over light heavyweight veteran Alexander Gustafsson in July 2022.

Oezdemir is stepping inside the octagon to avenge his teammate Gustafsson’s loss and it would be interesting to see whether he manages to do that this weekend. As we move ahead, let’s compare the stats of the two fighters that will collide inside the octagon at UFC 280.

After making his UFC debut in 2017, Volkan Oezdemir picked up three impressive wins and earned a title shot against Daniel Cormier. However, Oezdemir failed to capture the light heavyweight belt as Cormier finished him in that title bout.

Ever since that loss, he has been very inconsistent and has not been able to rise to the top ranks of the division. With that being said, this is an important matchup for him as a loss would jeopardize all his hopes of getting close to a title shot.

Speaking about this matchup, Volkan is the type of fighter who likes to stand and strike. Meanwhile, Nikita Krylov is a fighter who tends to take his opponents down and submit them. The best way for Oezdemir to win this fight is to use his kickboxing skills and be aggressive from the very beginning and look for the finish.

Because Nikita Krylov is a good striker with great striking accuracy and knockout power. If Volkan fails to finish the fight then the likelihood of Nikita out-landing him in strikes increases and it would be very difficult for him to win this matchup as the latter has more tools in his arsenal to win the fight.

Nikita Krylov is more well-rounded than his opponent Volkan Oezdemir and his grappling skills might make a difference in this fight if the going will get tough for him on the feet. Volkan’s tendency to close the gaps and wait to counter while striking could create openings for Nikita to take him down and control the fight on the ground.

Krylov is very dangerous once he lands a takedown as he has finished 15 of his opponents via submission. If Nikita does manage to dictate the pace of the fight with his accurate striking and takedowns then it would be very difficult for Volkan to make a comeback. So one can expect Nikita Krylov to get his hands raised by the referee at UFC 280.