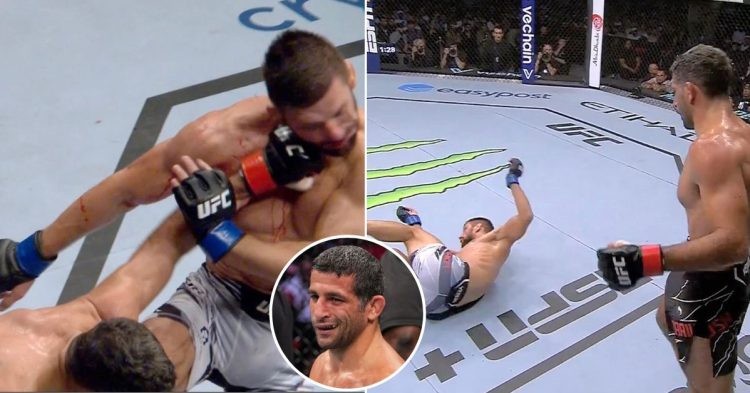 In the biggest card of the year, top UFC lightweight, Beneil Dariush took on the rising star of the division Mateusz Gamrot in the main card of UFC 280. The winner of this fight had an opportunity to potentially secure the number one title contender spot.

And both the fighters put on an incredible show for the fans in Etihad Arena in Abu Dhabi in a closely contested fight.

The first round was very competitive and both fighters had their moments. However, it was Mateusz Gamrot, who most likely won the fight thanks to his wrestling and ground control.

The grappling exchanges between the two were phenomenal and both showed high level grappling abilities. However, it was Beneil Dariush, who used his octagon experience and made a big comeback in the round number two.

In the third round, Mateusz Gamrot panicked and tried to secure the round with takedowns. However, Dariush had found his rhythm and secured a knock down, comfortably winning the final round and the fight.

What’s next for Beneil Dariush after win at UFC 280?

Mateusz Gamrot had a huge hype behind him coming into UFC 280. The former UFC lightweight champion, Khabib Nurmagomedov even called Gamrot a future title challenger in the UFC lightweight division. However, it seems Gamrot has a lot of adjustments to make in his game before he potentially achieves the UFC title.

On the other hand, Beneil Dariush has potentially secured a title shot. However, UFC president, Dana White has already confirmed that the winner of Charles Oliveira vs Islam Makhachev will be defending the title against the featherweight champion, Alexander Volkanovski next.

In his post fight octagon interview, Dariush stated: “I don’t have the answer for it. But I will tell you one thing, I am not a beggar. I have done everything I needed to do. My crown will come from my lord and saviour. I don’t care if I have to win another 10 fights before I get the belt.”

8-fights in a row but still patient! 🤯

Besides that, the upcoming bout between Michael Chandler and Dustin Poirier can have a big impact on the next title fight in the division. However, many fans believe that Darisuh has deserved a title shot with his 8 fight win streak.

Beneil Dariush made it clear that he is not going to beg for a title shot next and leave that upto UFC. Dariush was upset with Dana White after he made Alexander Volkanovski the backup for UFC 280 main event. And it’s needless to say that calling Volkanovski the number one title contender is a bit unfair to Dariush, who is on an impressive winning streak in the division.