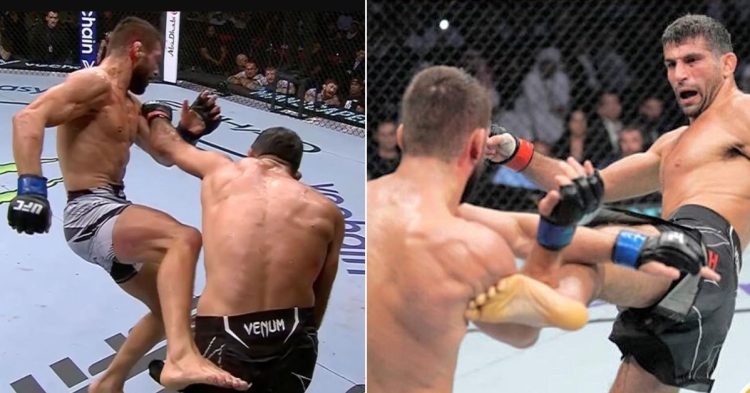 Just what we expected! Beneil Dariush and Mateusz Gamrot put on a masterclass at UFC 280. Both the fighters rely heavily on their grappling prowess and that’s what happened as the duo shared the cage in Abu Dhabi. There were some beautiful exchanges, some incredible scrambles, and a masterclass from Dariush to say nonetheless.

After everything was said and done, it was the Iranian fighter Beneil Dariush who extended his winning streak to eight straight wins with a comfortable unanimous decision win over Mateusz Gamrot. It was easier said than done for Dariush, who had to really put his foot on the pedal to beat a phenom in the form of Gamrot.

He takes the W over Gamrot at #UFC280 pic.twitter.com/0zbFk9N1TI

Dariush seemingly lost the first round, and this was evident on one judge’s scorecard. However, his takedown defense was on point, and his striking display was something to behold. Dariush made great use of high kicks, knee to the body, and a vintage right hand that even dropped Gamrot in the third round.

THE SOUND OF THAT PUNCH

It’s safe to say, Dariush is next for the title shot. However, the Iranian fighter is not going to beg for one. He made it clear in the post-fight Octagon interview that he would fight one more time if that’s what it takes to get a shot at the lightweight title.

Renowned boxing coach Teddy Atlas called it fantastic match-making from UFC and rightfully so. Two complete mixed martial artists with incredible wrestling, great jiu-jitsu, and some fine work on the feet to give the fans a fight to remember for years to come.

Give @beneildariush his respect! He deserves the next chance at the belt.

Fans and fighters alike chimed in on social media and demanded a title shot for Beneil Dariush and rightfully so. On an interesting note, Dariush is tied third for most victories in the UFC’s lightweight division. He is tied with Gleison Tibau, and just behind Jim Miller and Donald Cerrone.

Beneil Dariush’s 16 UFC lightweight wins are tied for the third most in division history, behind Jim Miller and Donald Cerrone, per @ESPNStatsInfo. Dariush is tied with Gleison Tibau. #UFC280

Beneil Dariush for the lightweight Title NEXT!!!! #UFC280

I have @beneildariush on this one! Great fight. #UFC280

What a fight @beneildariush and @gamer_mma 👏👏👏 You will be back stronger Gamer. You are made to do great things 👊.

Don’t ever disrespect and count Beneil Dariush out!! #UFC280

8-fights in a row but still patient! 🤯

Tremendous. Beneil Dariush continues to be one of the most criminally underrated talents in MMA. Man deserves to be fighting for titles. #UFC280

.@beneildariush deserves the next title shot, not Volkanovski #UFC280

Henry Cejudo went on to state that Beneil Dariush deserves the next shot at the title and not Alexander Volkanovski. UFC President Dana White has already confirmed that the featherweight champion is next for the lightweight gold.