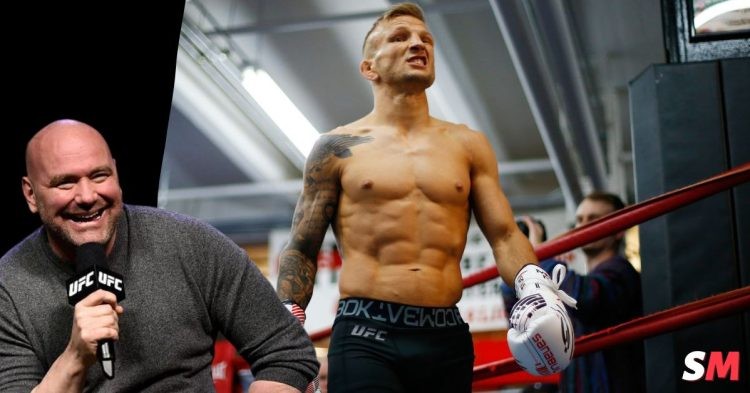 UFC President Dana White has come out in support of TJ Dillashaw after repeated allegations from fans and fighters alike regarding steroids. More recently, Aljamain Sterling claimed that he is convinced Dillashaw is looking for one way or another to cheat in the upcoming title fight.

When asked whether TJ Dillashaw will ever be able to shake that steroids use reputation, here’s what Dana White had to say.

“Yeah. You know, first of all, you know the guy’s probably, I don’t know this for a fact but I would assume he’s one of the most tested guys in the company right now. USADA is probably all over him um but I think that, you know, he made a mistake and he handled it like a man.”

In a cheeky dig at several other fighters, White admired Dillashaw for owning his mistakes, citing examples of incidents in the past where despite getting tested positive for steroids, fighters have completely denied any usage of banned substances.

“Let me tell you what we’ve had a lot of guys throughout the history of this company who have been busted for steroids and handled it the exact opposite way. They handled it not like men. Dillashaw didn’t, he took it on the chin and you got to respect him for that.” White added.

If not the most hated, TJ Dillashaw is arguably the most criticized fighter in recent times. The two-time Bantamweight Champion doesn’t have a very good reputation among his peers, including the guys like Cody Garbrandt, Uriah Faber, and other members of the Alpha Academy; a team that was behind his mixed martial arts journey from the very start.

After a huge fallout with Alpha Academy, TJ Dillashaw was already at the receiving end of some severe backlash from the fans. However, it was after he failed a drug test following his TKO loss against Henry Cejudo that things took an ugly turn. Dillashaw was suspended for two years after he tested positive for EPO and made his UFC return last year.

Recently, Dillashaw posted a photo on Instagram post workout and fans were quick to point out what appeared to be sweat beds, to claim that Dillashaw might be doping once again.

A year later, Dillashaw will step inside the Octagon once again in an attempt to become a three-time Bantamweight Champion as he takes on Aljamain Sterling in Abu Dhabi at UFC 280. Even after more than three years since the incident, fans have not spared Dillashaw and have taken every chance to throw allegations of drug use.

Do you think fans will ever forgive Dillashaw for doping? Do let us know in the comments section.