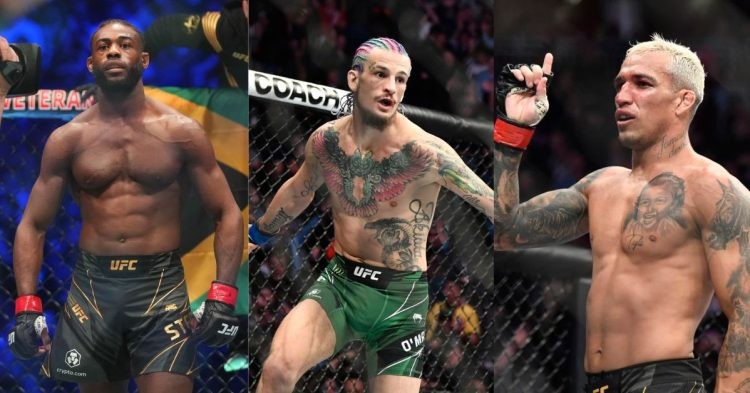 UFC 280: Charles Oliveira vs Islam Makhachev will take place this weekend on October 22nd at the Etihad Arena in Abu Dhabi, UAE. This PPV has several big names and features two exciting title bouts scheduled in the co-main and main event of the fight card.

Charles Oliveira will headline the PPV as he takes on Islam Makahchev in a five-round bout for the vacant UFC lightweight title. Leading into this fight, both the lightweights are on an incredible winning streak. However, one fighter’s win streak will come to an end after this fight.

Aljamain Sterling will defend his bantamweight title against TJ Dillashaw in a five-round co-main event bout. This will be his second title defense as he first defended his belt by edging past Petr Yan in their rematch.

Speaking about Petr Yan, he will be back in action as he takes on rising contender Sean O’Malley in a three-round bout which will take place on the main card. Apart from these big clashes, there are several mouthwatering fights that is scheduled to take place at UFC 280.

Which songs did Charles Oliveira and Islam Makhachev use at UFC 280?

Charles Oliveira last stepped inside the ring to defend his lightweight title against Justin Gaethje at UFC 274. After missing weight, Do Bronx was stripped from the title and only Gaethje had the opportunity to win the belt. For this big title clash, the Brazilian lightweight walked out to the tunes of “O Hino” by Fernandinho.

Oliveira has walked out to this Brazilian singer’s popular track on several occasions and hence we can expect the former champion to step inside the octagon using the same song.

Just like Charles Oliveira, his opponent Islam Makhachev uses only one song for his walkout every time he makes his way to the octagon. Makhachev walks out to Cenroev by Lezginka which is a popular Russian dance song with a clear melody and a fast rhythm.

Which songs did Aljamain Sterling and TJ Dillashaw use at UFC 280?

Aljamain Sterling’s last fight was against Petr Yan at UFC 273. The bantamweight champion used a combination of songs for his walkout. One of the songs was a hit Brazilian song Pepas by Farrukos and the second song was I love by American rapper Joyner Lucas.

TJ Dillashaw made his comeback in the UFC last year against Cory Sandhagen after his two-year suspension. The former bantamweight champion walked out to Red Hot Chilli Peppers track “Can’t Stop”.

Lieutenant Dan has used this as his walkout song for almost every fight in his UFC career. Therefore one can expect Dillashaw to step inside the octagon using the same song for his title fight against Aljamain Sterling.

Which songs did Petr Yan and Sean O’Malley use at UFC 280?

Petr Yan’s last matchup was a rematch against Aljamain Sterling for the bantamweight title at UFC 273 back in April 2022. The Russian bantamweight walked out to a song names Stem for the belt by Noggano.

Even in his first fight against Aljo which ended in a controversial manner, Yan used the same song for his walkout. For his last fight which was against Pedro Munhoz, Sean O’Malley walked out to American rapper Kodak Black’s song Super Gremlin.

Prior to his last matchup against Raulian Paiva, Suga Sean walked out to the song unreleased track Mapi of 6ix9ine. With that being said, it would be interesting to see O’Malley’s choice of music for his fight against Petr Yan.

Which songs did Belal Muhammad and Sean Brady use at UFC 280?

For his fight against Stephen Thompson, Remember the Name made his way to the octagon using Queen’s hit song “Crazy Little Thing Called Love”. On the other hand, his  opponent Sean Brady took on Michael Chiesa in the co-main event of UFC Fight Night 198.