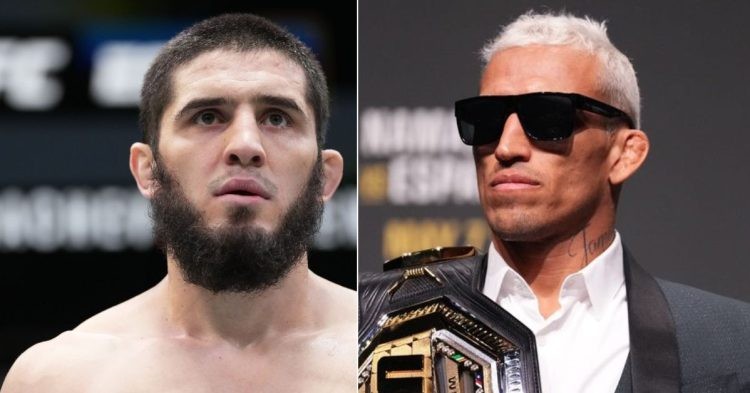 Charles Oliveira did not hold back as he called out Islam Makhachev for his lackluster UFC record ahead of the title fight at UFC 280 in Abu Dhabi.

The duo will share the UFC Octagon inside Etihad Arena in Abu Dhabi to determine the undisputed lightweight champion of the world at UFC 280 this weekend. Ahead of the fight, Oliveira made his feeling towards Makhachev known as he sent out a chilling warning to the Dagestani fighter.

Oliveira went on to remind the fans of his impeccable UFC resume which boasts victories over the likes of Jeremy Stephens, Clay Guida, Kevin Lee, Tony Ferguson, Michael Chandler, Justin Gaethje, and Dustin Poirier among other notable names in the world of mixed martial arts.

“I’m blazing my own trail,” Charles Oliveira stated. “I’ve beat former champions. I beat the whole top five. I knocked them out or submitted them. When will Islam do that?”

“I am going to knock Islam out in the first round. Then we’re going to celebrate.” Oliveira further added.

Charles Oliveira is currently on an 11-fight win streak, with each of his last three outings ending via way of stoppage. Do Bronx has raked in wins over the current top-5 UFC lightweight, except of course Islam Makhachev who sits at the #4 spot.

Charles Oliveira vs Islam Makhachev UFC record – Who has the edge?

It goes without saying, Charles Oliveira has a more impressive resume than Islam Makhachev and it’s not even close. Makhachev’s last victory came against Bobby Green, who is currently unranked in the UFC’s lightweight division. Prior to that, Makhachev took on Dan Hooker, who is currently ranked #14 on the list. Be that as it may, he has been absolutely dominant inside the Octagon.

Islam Makhachev is on a ten-fight win streak and has finished each of his last four opponents inside the distance. The Dagestani fighter has an Octagon time of just over five minutes in the last year, having gone to the fourth round only once in his UFC career.

It’s an exciting match-up and one that will determine the new UFC lightweight champion of the world. While Makhachev’s UFC record might not be as impressive as Charles Oliveira, it goes without saying, it doesn’t make him any less of a threat inside the Octagon.