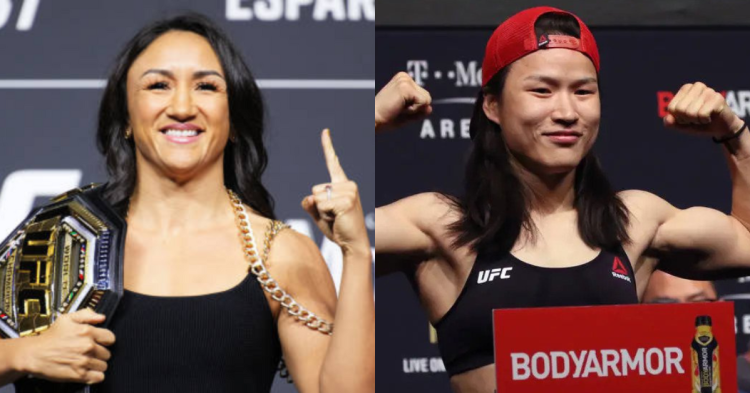 On the main card of UFC 281, a highly anticipated women’s straw-weight clash will be seen before the main event. As the co-main event, a title fight between straw-weights Carla Esparza and Zhang Weili will take place. Leading up to this fight, we can see that both fighters are coming off of wins. Esparza is coming off a win against the former Champion and fans favorite Rose Namajunas. Zhang Weili on the other hand is coming off of a win over former champion Joanna Jędrzejczyk.

The contrast in their last performances, however, is quite huge though. Esparza is coming off a lackluster title win. Her fight against Namajunas was one of the most uneventful UFC bouts of all time. Both the fighters just circled around each other without throwing any strikes or landing any takedowns. This has seriously put Esparza’s credibility as a champion under serious doubt.

Zhang Weili, on the other hand, has had immensely exciting and eventful performances. Her second fight against Namajunas was highly exciting with all facets of MMA combined to put on an exciting bout. Her fight with Jędrzejczyk was quite exciting too. It ended in Zhang Weili knocking out the former champion in magnificent style with a spinning back-fist.

Here are some stats about the two fighters:

Fans are hoping it doesn’t turn out to be another Rose Namajunas vs Carla Esparza. With Zhang Weili’s striking significantly superior and more powerful than Esparza, the latter is supposed to come in and try to wrestle against the China native. Esparza’s fight against Namajunas failed to give us much insight into her skills as it was quite lackluster. Meanwhile, Weili has been on a quest to get her title back.

The pair is expected to both strike, and take it to the ground. Zhang Weili, however, can do it all. Her strength can be seen in a recent video in which she was seen lifting the Heavyweight Champion Francis Ngannou off the ground. So are we to assume she will have more strength than Esparza in grappling exchanges? Maybe.