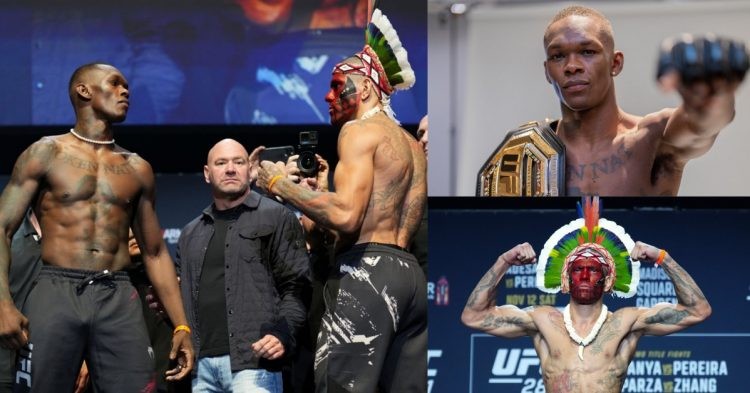 Alex Pereira is all set to face the final challenge in his quest for UFC gold. After overcoming three tough challenges in form of Andreas Michailidis, Bruno Silva, and Sean Strickland, Pereira will face an old foe for the UFC middleweight belt at UFC 281. The opponent for his maiden UFC title shot is the champ Israel Adesanya.

In the lead-up to their bout at the upcoming PPV, both fighters have been quite restrained. Although Pereira mocked Adesanya with some lighthearted humor, neither has gone overboard in their trolling. There was a sense of calm before the storm each time they faced off. It was evident that there is a lot of mutual respect between them.

That respect comes from their two kickboxing bouts in 2016 and 2017. Adesanya had a great performance at their first bout and put Alex under a lot of pressure. He slammed the judges for the result of the bout. But, for the rematch, Alex knew what The Last Stylebender was capable of. Hence, he forced Israel to have a brawl instead of allowing Izzy to implement his pragmatic style.

Pereira’s extremely powerful left hook found its target and knocked out Adesanya. Hence both have respect for each other’s skill sets. So how much money will the two fighters earn on November 12th inside the icon Madison Square Garden (MSG)? Let’s find out.

However, former UFC double champ Daniel Cormier revealed Israel Adesanya earns somewhere between $5-7 million for his championship bouts. So fans will have to wait for the final report to know the exact amount they earned for the PPV bout. But, as per MMA salaries, Adesanya earned $1,772,000 for his UFC 276 fight against Jared Cannonier.

Alex Pereira knocked out Sean Strickland on the same PPV card as he earned $244,000. It included $90,000 to show up and win. He earned $64,000 more in performance bonuses and sponsorships.