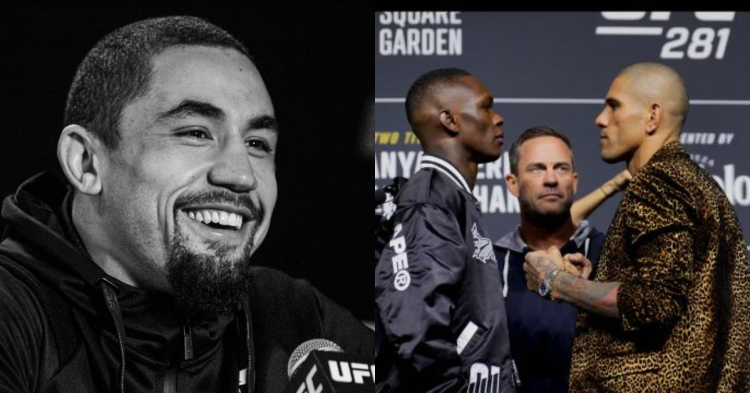 Former UFC Middleweight Champion and the number one contender Robert ‘The Reaper’ Whittaker had some stirring things to say about the upcoming Middleweight Championship fight between Israel Adesanya and Alex Pereira. The Reaper spoke out in an interview about what he would like the outcome of the match to be like.

Robert Whittaker, in a lighthearted mood, expressed his wish of seeing his two middleweight rivals damaging each other to the extent that none of them poses a threat to him in the future. Robert stated:

“Absolutely not! (Rooting for anyone). I hope they both hurt each other extremely. I hope they fight so hard and they hurt each other so bad that they never come back the same. I don’t…I do believe I’m the best middleweight in the world, I just get countered by Izzy so hard”

‘Bobby Knuckles’, as the fans call him, was speaking in reference to the two losses he has to Israel Adesanya. One of whom came by way of a devastating second-round knockout. Robert Whittaker is easily the best middleweight behind Adesanya. At least on paper. He has defeated pretty much everyone in the division’s top five. He is scheduled to face another high-level opponent Paulo Costa in his next fight.

In their second fight, a lot of fans had Robert Whittaker winning the fight on points. He just couldn’t get the judges’ nod. Following his loss, Whittaker was optimistic. He was heard saying that he and Adesanya are fated to fight each other a third time.

Even though the joke can be interpreted in bad taste, if it comes true it will definitely favor Whittaker. If the fight causes permanent damage to either of the two fighters, Robert will get a chance to claim his belt through a fight he’d be able to win relatively easily.

Robert Whitaker also spoke out on how the difference in gloves between Adesanya and Pereira’s kickboxing days and MMA gloves can be consequential to the bout. He said it as they cannot take the same shots cleanly that they took in kickboxing. Not to mention the difference in the muscle memories of a striker and a wrestler. Considering it can be a difficult thing to rely upon their grappling for both the strikers, we can expect a striking-focused bout.