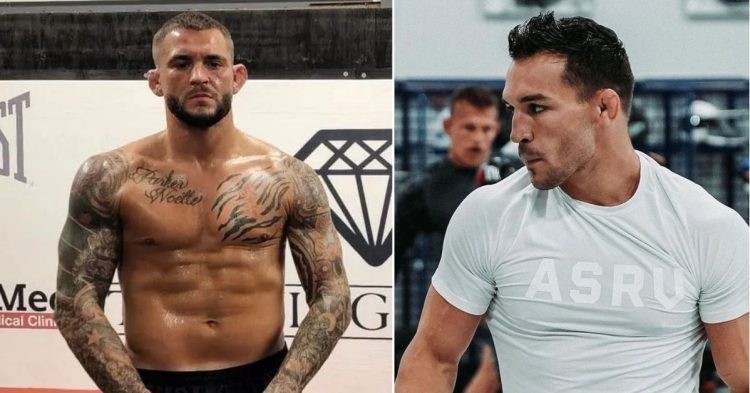 Dustin Poirier will return to the Octagon following a submission loss against Charles Oliveira to take on Michael Chandler in a three-round fight at UFC 281 inside Madison Square Garden, New York.

The former UFC interim lightweight champion will look to jump back to the title picture with a statement win over Chandler, who has looked absolutely terrific in his last few fights. Coming off a vicious KO win over Tony Ferguson, Chandler will be high on confidence. However, it doesn’t look like things will go in the favor of the former Bellator lightweight champion, if we look at this interesting detail, mentioned by Dustin Poirier himself.

Dustin Poirier is 3-2 in his last five fights. Both these losses have come against lightweight champions at the time in the form of Khabib Nurmagomedov and Charles Oliveira respectively.

Dustin Poirier has lost seven times in his professional mixed martial arts career. However, interestingly enough, he has never lost two fights in a row. Poirier takes this very seriously and believes it’s a reminder that he has worked on his mistakes heading into a fight, coming off a loss.

Poirier is certainly motivated to get the job done at UFC 281. Be that as it may, it will be easier said than done. Michael Chandler is a bad match-up for any fighter. Moreoever, with Chandler’s wrestling pedigree and his monstrous power, it could be a long night for Dustin Poirier.

Who do you think gets his hand raised at UFC 281? Do you think Dustin Poirier will suffer back-to-back defeats for the first time in his mixed martial arts career? Do let us know in the comments section.