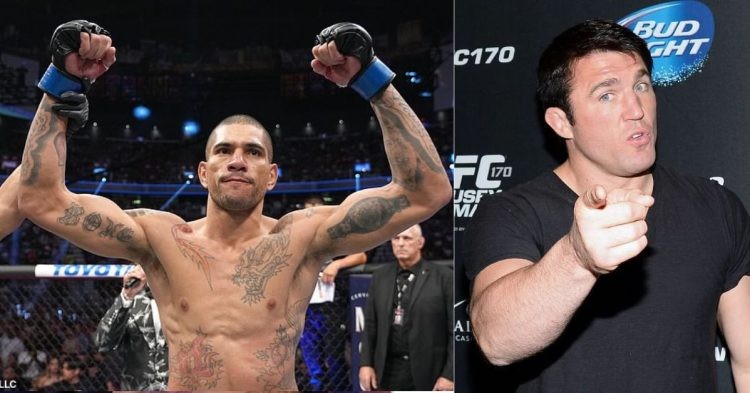 It’s not unrealistic to think Alex Pereira can become the first fighter to hand a loss to Israel Adesanya in the UFC’s Middleweight Division. Pereira has done it before, and twice! While it wasn’t inside the UFC Octagon or in a mixed martial arts bout, it was Adesanya and Pereira fighting in their strong suits – inside the kickboxing ring.

So what happens if Alex Pereira beats Israel Adesanya at UFC 281? Does that mean Pereira is a better fighter than Adesanya, considering he would have three wins over the consensus great of the division? Chael Sonnen ponders the same question. However, while answering that question, he gets a major fact wrong about the Brazilian fighter.

“If Pereira was to grab the belt, what an incredible accomplishment. He would then be undefeated. People forget that Pereira has never lost. We don’t really bang that drum because he only has five fights.” Sonnen said.

While it may come as surprise to Chael Sonnen, the fact that fans aren’t too high on Alex Pereira being undefeated is because he has lost inside the UFC Octagon.

Alex Pereira suffered the first loss of his mixed martial arts career in his MMA debut which came against Quemuel Ottoni back in October of 2015 at Jungle Fight 82. After failing to finish Ottoni on the feet, who showed incredible toughness, Pereira succumbed to a third-round submission loss via rear-naked-choke in the third round.

A lot has been said about how mixed martial arts rules will mean the result could be a lot different than the last two times Adesanya and Pereira came face-to-face. However, Chael Sonnen believes it will be no different, and once again the duo will engage in a striking slugfest.

“I really believe we are gonna see a stand-up fight. Now that’s a little naive of me considering the last time that we had two great strikers fight in the main event for the world championship was Ciryl and Francis, and we saw a takedown.” Sonnen said.

Sonnen argues Pereira has a long journey ahead of him even if he managed to beat Israel Adesanya. The way that the Stylebender has absolutely dominated the division, Pereira will have to do just that to call himself a better fighter than Israel Adesanya.

It’s similar to Adesanya vs Robert Whittaker, while Adesanya might have two wins over the Reaper, to confirm the fact that Adesanya is a lot better than Whittaker won’t be absolutely right! One cannot simply ignore that Whittaker has also torn through the entire division. And that’s something Pereira will have to do if he manages to triumph over Adesanya at UFC 281.