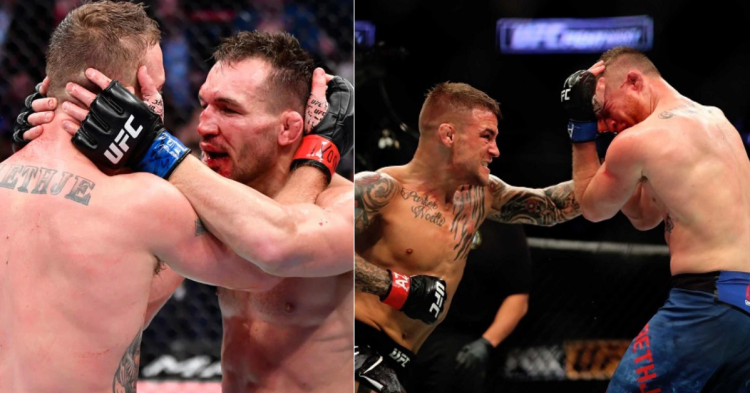 Dustin Poirier and Michael Chandler may not have a huge ton of respect for each other, but here’s an interesting fact that unites both these fighters if you add Justin Gaethje into the mix.

Dustin Poirier and Michael Chandler are the only two fighters to win their next fight after fighting with Justin Gaethje. The former interim lightweight champion Justin Gaethje never fails to put on a show whenever he steps inside the Octagon. Win or lose, both Gaethje and his opponents don’t leave the cage without battering.

As was the case when Gaethje shared the UFC Octagon with Dustin Poirier and Michael Chandler back in 2018 and 2021 respectively. While Poirier triumphed over Gaethje in a brutal war back at UFC Fight Night, Chandler fell short against Highlight in a Fight of the Year outing just last year.

Be that as it may, both Poirier and Chandler emerged on top in their next fights. It’s interesting to note, none of the UFC fighters have gone on to win their next fight after taking a fight against Justin Gaethje. Even Charles Oliveira fell short against Islam Makhachev which came next to his first-round submission win over Gaethje.

Michael Johnson, Donald Cerrone, Tony Ferguson, and Edson Barboza, all the fighters have gone on to lose their next fight, well except for Poirier and Chandler.

Dustin Poirier and Michael Chandler will share the UFC Octagon on November 12 on the main card of UFC 281 inside Madison Square Garden, New York.

Needless to say, it promises to be an exciting match-up and one that has “barnburner” written all over it. Two of the most fiercest strikers will collide inside the cage and the winner of the fight could possibly find himself in title contention.

Dustin Poirier will make his return to the cage after a third-round submission loss against Charles Oliveira. Meanwhile, Chandler will jump back to the Octagon in the back of a vicious KO win over Tony Ferguson. Who do you think gets his hands raised next weekend? Do let us know in the comments section.