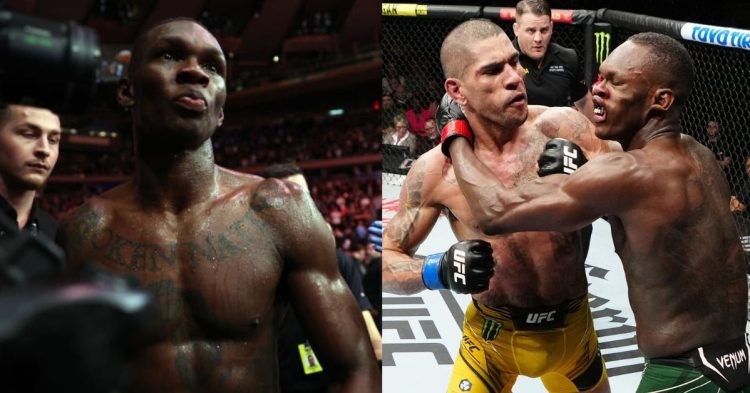 The build-up to UFC 281 lived up to the expectations, as it ended up being one of the best UFC PPVs of the year. Following an instant classic between Dustin Poirier and Michael Chandler, and a title fight between Carla Esparza and Zhang Weili, fans were expecting fireworks in the main event. Needless to say, fans were not disappointed. Israel Adesanya fought an almost perfect fight up until the last round in which he got caught by Alex’s vicious left hook and got stopped in his tracks to victory.

Following the fight, however, both the fighters put their history and their animosity behind them as they both hugged each other and exchanged words of respect. The build-up to the fight was quite heated, with Alex Pereira bringing up the history between them. He said that Israel Adesanya would be paranoid due to the loss he had against Pereira in kickboxing. He also asked Adesanya repeatedly whether he wants to be there with him or not.

Following the fight though, there was no animosity. Even in his post-fight interview, Alex gave Adesanya his respect and stated that all the trash-talk or trolling he did was solely to obtain a mental edge over the former champion.

Fans saw a humble Israel Adesanya after the loss

Adesanya handled the loss to Alex Pereira in the classiest way possible. He gave Pereira his respect and bowed down to the crowd. Israel Adesanya has always been humble in defeats. His first UFC loss came to Jan Blachowicz as he got out grappled by the former light heavyweight champion.

The loss to Pereira has to have way more of a sting for the champion though. Despite that the pair exchanged words of respect with the Stylebender being ever so classy. He followed it up by hugging Pereira and bowing down to the crowd.

This is the third loss for Israel Adesanya against Alex Pereira. The Stylebender got beaten in his own domain of striking, and that too in devastating fashion. Unlike the Jan fight, Adesanya actually got finished in this fight.

Considering there was little to no trash talk against Blachowicz, and he did not stand to lose anything in his own weight class. That loss was more of a learning curve for his future light-heavyweight bouts. This loss, however, cost Adesanya his belt, his unbeaten middleweight record, and his chance to redeem himself against Pereira.

To stand up with his head held high is a tale of how great his character is. Even the former light-heavyweight champ Glover Texeira paid his respect to Adesanya after the fight. It’s needless to say that, Israel Adesanya has earned respect from the fans with the way he has handled his first knockout loss in UFC.