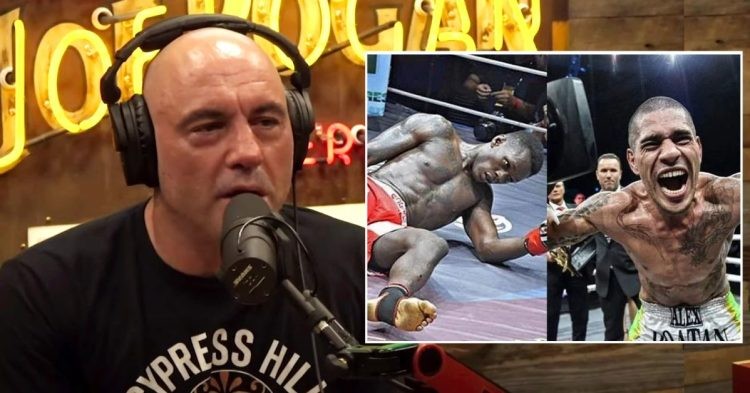 For UFC fans, the rise of Alex Pereira has been nothing less than spectacular, but the former Glory kickboxing champion has been one of the most notable names in the world of combat sports for several years. Pereira made his UFC debut just last year and is set to take on Israel Adesanya at UFC 281 later this month on November 12.

While a lot of UFC fans are learning more and more about the Brazilian fighter as he stands on the cusp of global stardom, for those who follow kickboxing as well, Pereira has always been a star! For someone like Joe Rogan, who is too keen on the world of combat sports, Periera was always one of his favorites.

Ahead of quite possibly the biggest fight of this year in the form of Israel Adesanya vs Alex Pereira for the UFC’s Middleweight Championship, here’s what the UFC commentator had to say about the Brazilian fighter.

“That dude is different. He’s scary, that dude has nuclear power. He’s got crazy power. Even when he was over in glory I was a big fan of his over in kickboxing he was fu***g  everybody up in two different weight classes over there. 205 he was knocking people dead. That dude is terrifying.” Rogan said on the JRE podcast.
Needless to say, Joe Rogan is quite high on Poatan ahead of UFC 281. However, that doesn’t mean he is underestimating Israel Adesanya.

While Alex Pereira’s monstrous power is certainly no joke, Joe Rogan believes Adesanya has changed a lot since those two defeats he suffered at the hands of Alex Pereira.
While the fact that this is not a kickboxing fight but a mixed martial arts bout with comparatively small gloves, Adesanya’s evolution inside the Octagon has been tremendous, to say the least.

“I think the Izzy of today is very different than the Izzy that fought Pereira twice. Both fighters. He is different now. He’s better. Way better. The thing about that fight that is so intriguing is, that Izzy has five-round experience, championship-level experience, and he’s got big-moment experience. He’s got all these things. But Pereira has got that power. Everybody gets hit.” Rogan added.
It’s an exciting match-up that truly has the world divided. And it’s not even a case of a technical striker vs a power puncher considering Pereira is incredibly astute as a kickboxer. How good is he as a mixed martial artist? We will know on November 12 at UFC 281 inside MSG!
Tags: Alex PereiraIsrael AdesanyaJoe RoganUFCUFC 281
Previous Post