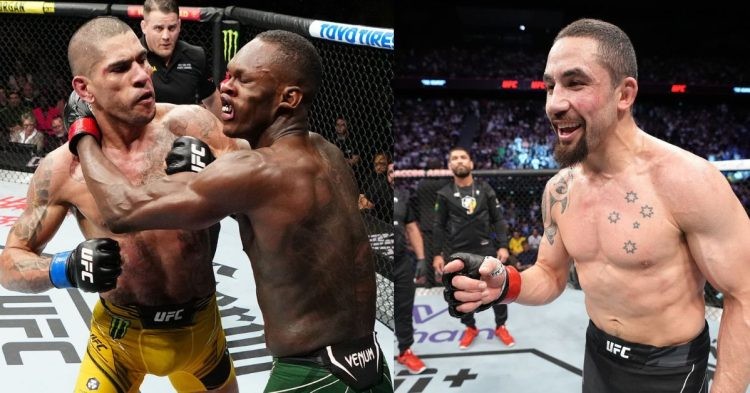 Robert Whittaker wanted to see Israel Adesanya and Alex Pereira hurt each other badly. And it seems he got his wish fulfilled as Pereira and Adesanya went into a gruelling war. Alex Pereira winning the title has certainly made the middleweight division exciting again.

Robert Whittaker and Israel Adesanya have met twice before in the octagon, where Adesanya won both times. Whittaker, nicknamed Bobby Knuckles, is the No. 1 contender in the UFC middleweight ranking is likely to get another shot at the title soon.

Israel Adesanya faced his former Glory kickboxing rival, Alex Pereira in one of the most anticipated cards of the year. The fight was overlooked as vengeance for Adesanya since he has lost to Pereira twice when they met before. Adesanya lost the kickboxing rematch against Alex Pereira, where he got knocked out by the Brazilian mixed martial artist.

Early in the fight, both fighters traded shots and threw leg kicks but Adesanya had more control over the fight. Pereira took a beating in the first round and was drained in the fourth.  Adesanya employed a smart strategy that combined takedowns, clinching, and leg kicks to wear down his opponent. But there is a reason Pereira defeated Adesanya in their last two kickboxing bouts, and that reason is his ruthless strength.

It’s no shock that Whittaker was surprised to see Izzy stopped. previously Whittaker has predicted that it is a 50-50 fight and if he was to bet, he would go with Adesanya.

What does Israel Adesanya’s loss at UFC 281 mean for Robert Whittaker?

Robert Whittaker has an MMA record of 24-6 with his last two losses coming against Adesanya. Paulo Costa is the next opponent Whittaker is facing. If he beats Costa and Adesanya goes on for an extended layoff, then Whittaker has the opportunity to call in for the title shot against Pereira.

Robert Whittaker might also call out Israel Adesanya for a third fight to get his win against the middleweight. But it’s certain that The Last Stylebender won’t sit this one out. He will aim for a title rematch against Alex Pereira.