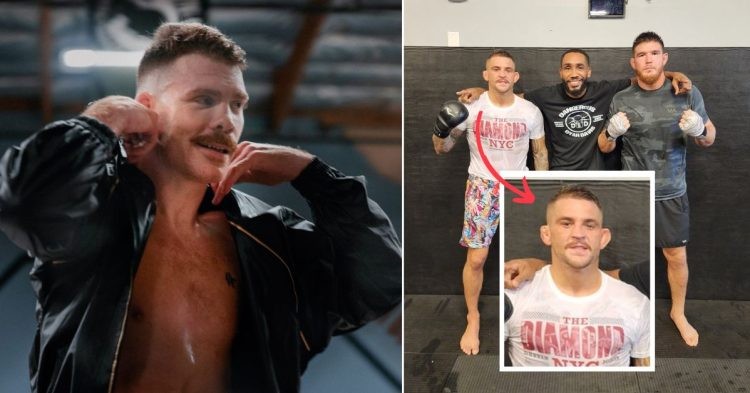 Not even a bald Dustin Poirier can beat the current look of the former lightweight title challenger ahead of his fight against Michael Chandler at UFC 281. In a recent photo posted by the Diamond ahead of a possible #1 title contender’s fight inside Madison Square Garden, Dustin Poirier was spotted donning a mustache and fans can’t keep calm.

While some fans compared Dustin Poirier to Paul Felder, another pointed out how it’s the beginning of the “Mustache Diamond Era”.

Pushed so hard a mustache popped out . 😩

I support the mustache diamond era

the mustache is salon quality sir

Another noted Poirier as a new mythical fighter with the mustache on! What do you make of Dustin Poirier’s new look ahead of UFC 281? Do you think he will carry the same look heading into the UFC PPV? Do let us know in the comments section.

Who will Dustin Poirier fight if he beats Michael Chandler at UFC 281?

There are a lot of options for Dustin Poirier after UFC 281 regardless of the result. Should Poirier get past Michael Chandler next weekend, a possible rematch against Charles Oliveira seems to be a very likely possibility. Moreover, a title eliminator against Beneil Dariush doesn’t sound like that bad of an idea as well.

Colby Covington for a money fight and a fourth fight against Conor McGregor are also viable options for the UFC lightweight. However, a lot will depend on the result of UFC 281, and quite possibly, Dustin Poirier’s last run at the lightweight gold.

After two failed attempts at the lightweight gold, Dustin Poirier might have to pick up multiple wins before he can get his hands on a title shot. Poirier was last seen against Charles Oliveira in a second-round submission loss. Prior to that, Poirier had picked up back-to-back stoppage wins over Conor McGregor, and a decision win over Dan Hooker.

The fight against Michael Chandler is certainly a fresh start for Dustin Poirier, who will look to right the wrongs in his last run for the title.