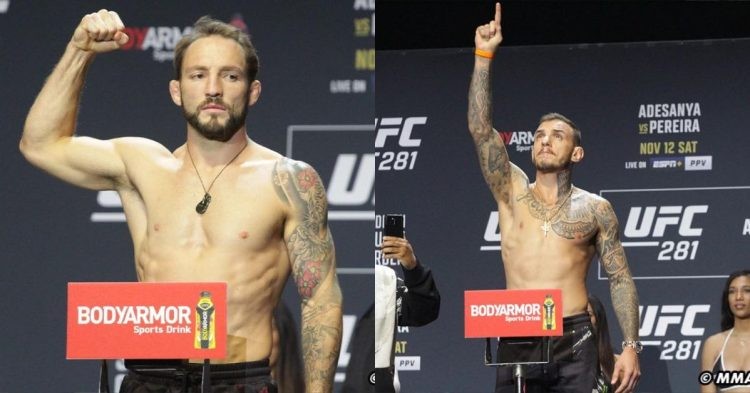 Brad Riddell is facing Renato Moicano on UFC 281 at Madison Square Garden this coming Saturday. Ahead of Adesanya and Pereira’s showdown, the main event will feature a bout between submission expert Renato Moicano and experienced Muay Thai fighter, Brad Riddell. Both of them come from losses fans are waiting for this banger fight. Brad Riddel with an MMA record of 10-3 and Renato Moicano with a record of 16-5-1 are both seasoned fighters.

Riddell was moving rapidly up the rankings after his first four octagon battles, all of which were challenging. He prevailed in decisions over Drew Dober, Jamie Mullarkey, Magomed Mustafaev, and Alex da Silva Coelho. He later came into contact with fellow striking prodigy Rafael Fiziev (2021), who spectacularly ended his seven-fight winning streak in the third round with a spinning wheel.

Moicano last competed in March when he was a last-minute substitute for Rafael Dos Anjos. A risky move considering he was on a two-fight winning streak and hadn’t prepared for five rounds. Nonetheless, Moicano put on a show. Winning over spectators by displaying a heart and bringing Dos Anjos to the final bell despite frequently having to recover from challenging circumstances. This fight showed that Moicano could take on some punishment and can withstand damage.

Riddell on the other hand, who has lost his last two fights in the organization, will also be under some pressure since he wants to avoid the dreaded three-fight losing streak.

This stand-up fight will be a display of skillful and aggressive Muay Thai. Despite being four inches taller, Moicano only has an inch of reach. This battle of lightweights will be too good to be on the preliminary card.

Moicano can be dangerous if taken to the ground but Riddell being a seasoned wrestler has very good takedown defenses. Moicano will have a bad time if he doesn’t take Riddell down in the first round.