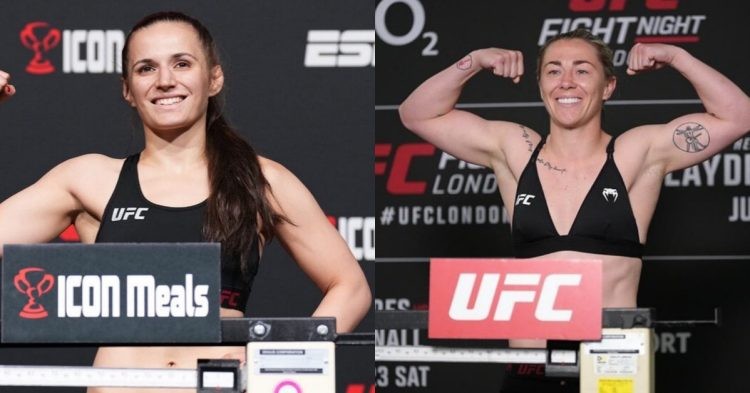 British MMA sensation Molly McCann is back in action at UFC 281. After beating Hannah Goldy in July of this year, Molly will now take on Erin Blanchfield in prelims of UFC 281 inside Madison Square Garden arena. Ahead of the bout, Molly occupies the 15th spot, while Erin is ranked 12th in the flyweight division. So the bout is definitely going to be a big test for the Liverpool native.

UFC superstar Conor McGregor predicted that Molly McCann can knock out the women’s 125lbs champ Valentina Shevchenko. He is not wrong, as McCann is on a spectacular run at the moment. She is unbeaten in her last 3 fights. However, she had a 3-fight win streak previously as well, which ended after she suffered two back-to-back defeats against Taila Santos and Lara Procópio.

So she will definitely look to maintain her consistency and end the year will a big win. But Erin Blanchfield is the better-ranked fighter and she is unbeaten in the UFC so far. Similar to Molly, Erin also won 3 of her last bouts against Sarah Alpar, Miranda Maverick, and JJ Aldrich. Hence, the bout on Saturday will feature two in-form competitors fighting for a better ranking in the division.

So who will come out on top in a fight which has two fighters who are enjoying great patches of forms in their respective careers? Let’s take a look at the stats and find out!

Can McCann continue her winning streak against Blanchfield at UFC 281?

Erin Blanchfield has only 1 loss in her career, which came against Tracy Cortez at Invicta in 2019. However, since that loss, Erin won 6 fights successively, with 3 finishes. In her 9 career wins, the 23-year-old has 2 submissions, 2 KO/TKOs and 5 decision wins. But, in comparison, Molly has a better finishing rate. She has 6 KO/TKO wins and 7 decision wins in her career.

But, the stat which stands out is Molly’s lack of submission wins. Meatball Molly is a relentless striker who swarms her opponents with a great number of strikes. Molly has an average of landing 5.84 strikes per minute, which makes sense given her KO record.

Although Molly absorbs at a rate of 4.84 strikes per minute, she is yet to suffer a single knockout loss in her career. So it proves how good her chin really is. But she did lose by submission in her UFC debut against Gillian Robertson. That may be an area of concern for Molly before fighting Erin Blanchfield.

Blanchfield secures an average of 3.99 takedowns per fight. Hence, it will certainly test McCann’s takedown defense of 46%. So Erin will definitely look for takedowns very early on in the bout. However, the American fighter also outshines Molly in terms of striking stats as well. She lands at an average of 5.69 per minute and absorbs only 2.50 strikes at the same time.

So the stats suggest that Erin Blanchfield should get the job done at the upcoming PPV. Not just skills, Erin will also have a big advantage in terms of her reach as well. She has a great striking defense and her long limbs will help her both on the feet and in grappling. Hence, nicknamed Cold Blooded, Erin Blanchfield will be the smart pick for this Saturday.