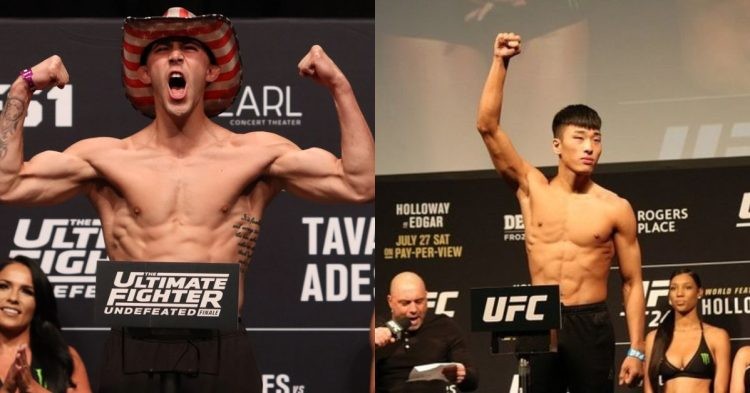 Mike Trizano and Choi Seung-Woo set to fight on the early prelims at Madison Square Garden in the UFC 281 card.

With both fighters fighting it out for the ranking in the UFC featherweight division, it’s guaranteed to be a barn burner. Both fighters are incredible strikers and this matchup could be a coin toss.

UFC 281 is stacked with some of the best fights of the year. The main even between Israel Adesanya and Alex Pereira can be the best striking showcase of all time. And the lightweight fight between Michael Chandler and Dustin Poirier will have the fans on the edge of their seats at MSG.

But, Trizano and Seung-Woo will have a huge opportunity to leave a impact with an incredible performance in one of the biggest cards of the year.

Mike Trizano and Choi Seung-Woo are both coming off two losses and it’s a do or die situation for both the fighters involved.

Both these fighters are good strikers and this matchup could turn out to be a brawl between the two. Earning their position isn’t going to be easy.

Mike Trizano is a pretty well-rounded fighter. He possesses incredible power as well as wrestling up his sleeve and also mentioned that he’s confident and unfazed by the two losses.

Choi Seung- Woo does land incredible combinations as well and catches onto slips easily. A good counterattacker and all-round striker as a whole.

The durability of Choi Seung is in question and his wrestling is another factor that he lacks. He has solid kick power too but could be countered easily.

Mike Trizano vs Choi Seung-Woo: Who gets the win?

Trizano is the favorite to win this fight at UFC 281 since he’s a well-rounded fighter and has the durability for a 3 round war.  He’s got a solid chin to hold up against striking and is mature enough when to chase and get that takedown to take control of the fight.