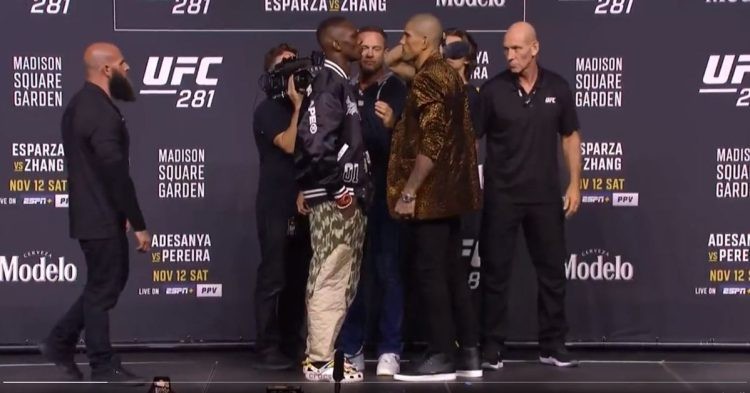 Israel Adesanya and Alex Pereira came face-to-face for the first time since squaring off against each other more than five years ago in 2017. Ahead of UFC 281, Adesanya and Pereira had a back-and-forth during the UFC 281 pre-fight press conference.

Both men are prepared for wherever the fight goes 👊

There was a moment during the press conference where Alex Pereira reacted strongly to Adesanya’s repeated mentions of an “army” referring to his fellow City Kickboxing partners also competing on the card. “You’re gonna be alone inside the Octagon without your team,” Pereira responded, igniting a fiery response from the Stylebender.

Things are heating up between @stylebender and @AlexPereiraUFC…and WE LOVE IT 🤩#UFC281 pic.twitter.com/4u0rvkeCaa

The last time both these fighters faced each other was at Glory Kickboxing back in March of 2017. Almost five years later, they started down once again.

Israel Adesanya vs Alex Pereira faceoff ahead of UFC 281

When the time came to come face-to-face, it got really tense and the energy was quite evident. Both the fighters exchanged words, and while it was clear from Adesanya’s gesture that he understood nothing, the death stare from Pereira was once again on the Stylebender.

Moments after being separated, Adesanya send a message to his fans as he gestured to his belt. “This belt ain’t going nowhere. This ain’t fu**** going nowhere.”

The reaction from the crowd was as expected with loud cheers for the UFC’s Middleweight Champion Israel Adesanya, and a hostile response to the Brazilian Alex Pereira.

The duo will once again come face to face in the coming weeks before eventually stepping inside the Octagon on November 12 inside Madison Square Garden to settle their beef.