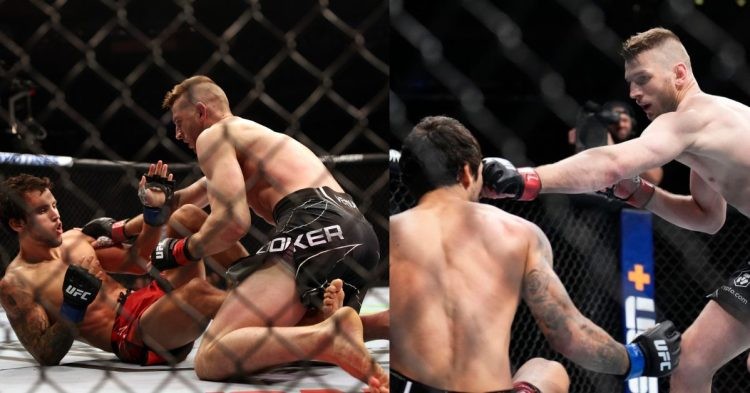 City Kick Boxing went to war at UFC 281, Madison Square Garden. While Cralus Ulberg secured a TKO win in the prelims Brad Riddle suffered yet another devastating loss at UFC. The most experienced UFC fighter from CKB, Dan Hooker took on Claudio Puelles in the main card and the fans certainly enjoyed this fight at Madison Square Garden.

Dan Hooker has been on a losing skit ever since his loss to Dustin Poirier. The CKB fighter suffered defeat to Michael Chandler, Islam Makhachev, and Arnold Allen in his next fights.

Even though he was able to outclass Nasrat Haqparast, the knockout losses to Chandler and Allen(in the featherweight division) was certainly concerning for the UFC veteran. Many believed it was a do or die fight for Dan Hooker and he certainly gave his all for his fight against Claudio Puelles.

The first round was pretty tensed for the Hooker fans as Claudio Puelles came very close to finish the fight with a heel hook. However, Hooker remained clam during the grappling exchanges in round one and survived the submission attempts.

Claudio Puelles was certainly adamant to take the fight to the ground, but Dan Hooker wanted a striking battle at UFC 281. The second round was bizarre as Claudio Puelles kept attempting imanari rolls and threaten Hooker with a submission.

However, Dan Hooker was a sniper tonight with his striking, especially with his body kicks. And it was the body kick that finished the fight in the round number two.

The Hangman is back in the win columns with a fairly dominant win over Puelles in the iconic Madison Square Garden. And following the fight he had a bold message to the lightweight division.

The UFC veteran called out Dustin Poirier again, who is competing against Michael Chandler tonight at UFC 281. However, a fight against the likes of Rafael Dos Anjos or Mateusz Gamrot would certainly make sense for Hooker.

Jalin Turner, who defeated Brad Riddle in his next fight, is also a possible matchup for Dan Hooker. Even though it’s not clear who Hooker fights next it’s certain that lightweight division is his home.