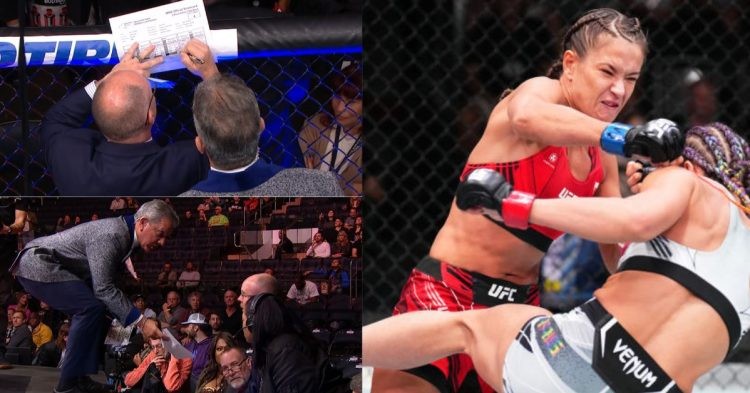 In one of the most stacked cards of the year, UFC returns to Madison Square Garden with two massive title fights. In the main event of UFC 281, Israel Adesanya defends the middleweight title against Alex Pereira.

On the other hand, UFC veteran, Carla Esparza defends her strawweight title against the former champion, Zhang Weili. With an incredible main card ahead, fans have already seen a lot of dram and action packed fights in the prelims.

It was a close fight and going into the third round many believed that both Silvana Gomez Juarez and Karolina Kowalkiewicz won one round each. While Kowalkiewicz secured the first round comfortably with her grappling Silvana Gomez made a comeback in the second round and arguably won the round.

In the third round, Silvana Gomez was winning the round until Kowalkiewicz secured a knock down. The majority of the fans would agree that Kowalkiewicz won the fight against Silvana Gomez. However, the judges were not too sure about their decision at UFC 281.

Judges Changed the Scorecard at UFC 281

Talking about the situation, the former UFC two division champion, Daniel Cormier stated: “Oh my god they are flipping the scorecards. I have never seen this in my life. Somebody is going to be really mad”.

Karolina Kowalkiewicz got the decision nod over Silvana Gomez Juarez after a strange scene with the scorecards before the result was read. 🧐#UFC281 | Live results: https://t.co/IwlReiajNE pic.twitter.com/fPxFOpw9wM

In the end, the judges scored the fight in favour of Karolina Kowalkiewicz. This marked the second consecutive win for Kowalkiewicz after her devastating 5 fight losing streak. But, even she was concerned when the judges decided to change the scorecard inside the octagon.

UFC fans showed their frustration and mocked the UFC judges for this mishap and trolled them on twitter after the fight.