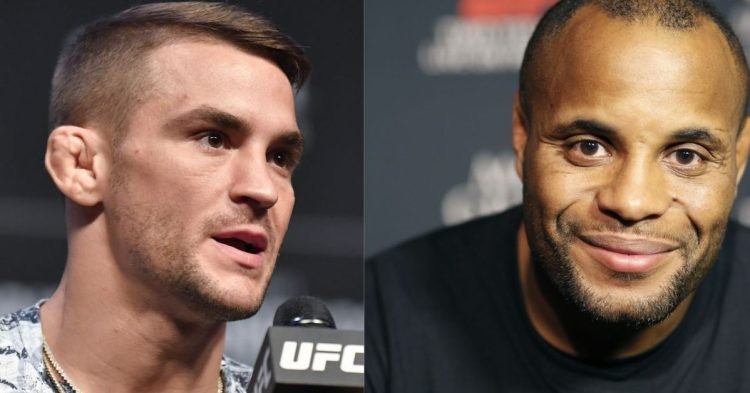 Dustin Poirier and Michael Chandler will finally share the Octagon as UFC 281 goes down inside Madison Square Garden on November 12 in New York, United States. There is a lot of heat heading into this match-up, and it won’t be wrong to say that there will be a lot of back and forth as we come closer to the day of the fight.

With more than a month to go for the much-anticipated clash, both Poirier and Chandler took the time to sit with Daniel Cormier in the recent episode of DC & RC to talk about their rivalry and what separates both the UFC fighters.

The rivalry between Chandler and Poirier stems from their comments about each other on various platforms. Both the fighters have admitted to not liking each other and will possibly look to bury the hatchet at UFC 281.

While the heated brawl at UFC 276 stands between Chandler and Poirier might have seen Poirier screaming, “You’re a fake motherf****r”, the former interim champion vehemently denied any such comment in his recent appearance with Daniel Cormier.

On top of that, he pointed the finger at Daniel Cormier, stating that he never said Chandler is fake. ” You said that, I didn’t say that. I don’t know the guy personally. He might be a great guy.” Poirier said. ”

“What I do know is that when he’s telling Ariel Helwani I don’t even when I think of lightweight fighters, I don’t even think of Dustin Poirier and then he tells you when you ask him a question, oh Dustin has been a mainstay in the UFC, those this that back and forth stuff that’s just obvious to me. So it doesn’t matter, November 12th look, I wish it was five rounds. We’re gonna throw hands for three rounds and we’ll, we’ll settle it.” Poirier said.
Chandler was quick to interject and opined how his comment about him with Ariel Helwani was in light of Poirier’s thoughts and words at the time.
“At the time of the Ariel Helwani interview, Dustin, you have had a phenomenal career. you’re talking about you don’t know how long you want to do it anymore you’re talking about, ‘I don’t know if I’m going to fight at 170.’ You’re talking about fighting Nate Diaz which is no longer on the path to fighting 155. So yes I do think in that moment when I was thinking about the lightweight division, uh you weren’t one of the guys who was necessarily on the radar.” Chandler clarified.
You can watch the entire episode of DC&RC with Dustin Poirier and Michael Chandler right here.
While there is definitely a heated rivalry between both fighters, their recent interaction also points to healthy competitiveness and nothing else. Both Chandler and Poirier never shy away from throwing hands and engaging in a slugfest, so it’s safe to say fans are in for a treat when both of these fighters collide at UFC 281.
Tags: Daniel CormierDustin PoirierMichael ChandlerUFC 281
Previous Post