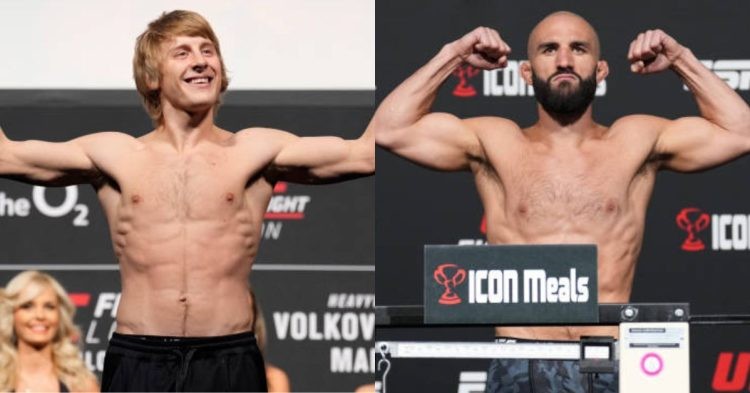 At UFC 282, two of the rising lightweight fighters are set to go against each other as Paddy Pimblett is set to battle Jared Gordon. The fight will take place in the co-main event spot of the UFC 282 card. The card is headlined by the vacant light-heavyweight title fight between Jan Blachowicz and Magomed Ankalaev. The fight Between Paddy Pimblett and Jared Gordon is going to be interesting considering the skillet both of them possess. It will be an important fight considering the landscape of the UFC lightweight division. The winner of the fight will definitely be considered the next prospect in the lightweight division.

Paddy Pimblett is one of the biggest prospects in the UFC at the moment. He came into the UFC with a huge hype train behind him. Pimblett made his promotional debut against Luigi Vendramini and won the fight via knockout in the very first round. This was a dream start to his UFC career. He is 3-0 in his UFC career and 19-3 in MMA. In his last fight, he faced Jordan Leavitt and defeated him via submission in the second round of the fight.

The fight will be an important one for both of these fighters, as all eyes will be on them. It’s a great opportunity for both the fighters to seal the deal and make a statement as they are fighting in the co-main event spot of a stacked card.

Paddy Pimblett as usual will be looking to finish the fight quickly. The three-round fight will favor Paddy as he fights at an amazing pace. He will look to utilize his striking and grappling mixture. If Pimblett is successful in making it a grappling exchange, then he will look for a submission. He already has 2 submission wins in his thee fight UFC career. He also has amazing striking skills, which can seem too much for Gordon.

On the other hand, Jared Gordon is a technical fighter who fights at a slow pace and avoids unnecessary dangers. He will try to utilize his trekking skills to keep a distance from Paddy. But if he does get some opportunities, he won’t shy away from a back-and-forth fight. Jared Gordon will be careful with his approach as he won’t try to get into the favorite zones of Pimblett. As an underdog, he is planning to shock the world and take out Paddy Pimblett and turn Pimblett’s hype in his favor.

Looking at their record, it seems an interesting fight, but Pimblett has the better chance to win. Paddy Pimblett has more options to secure the win against Jared Gordon.