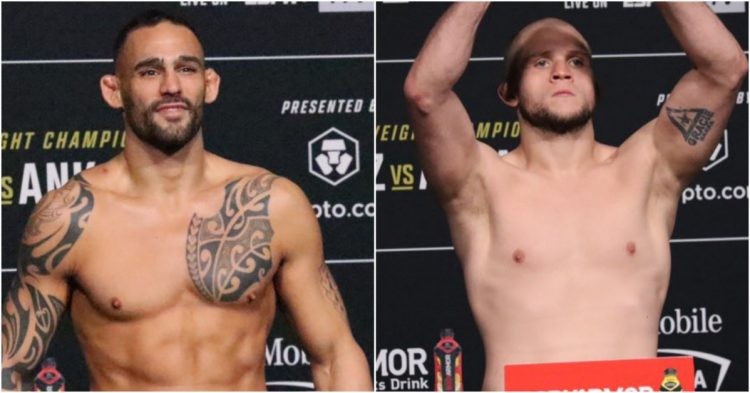 UFC had some great PPV events throughout 2022 and they will close out the year with UFC 282. The card will see Magomed Ankalaev taking on Jan Blachowicz for the recently vacated light heavyweight title. But, the main card will also feature a showdown between Santiago Ponzinibbio and Alex Morono at a catchweight of 180 lbs.

Alex Morono is on the rise in UFC. The Texas native is on a brilliant run and he is currently booming with a ton of confidence. Morono has beaten all 4 of his last opponents, which include Donald Cerrone, Mickey Gall, and Matthew Semelsberger. The 32-year-old joined the UFC in 2016 and has a UFC record of 11-4-1.

Santiago Ponzinibbio, on the other hand, is yet to discover his form. Since returning from his 3-year exodus from the sport, Ponzinibbio has lost 3 of his 4 fights. Li Jingliang knocked him out in 2021. However, his last two losses came via split decisions against Geoff Neil and Michel Pereira. So he will desperately be looking to get back to the winning column.

So, who comes out on top during a battle between two experienced welterweight fighters at UFC 282? Can Ponzinibbio adapt to the change in his opponent? Let’s find out!

Can Ponzinibbio get back to winning ways against Morono at UFC 282?

Santiago Ponzinibbio has 26 wins in his pro-MMA career. The Argentine has knocked out 15 of his opponents, while he has submitted 6 of them. However, that does not come as any surprise. Fans have seen during bouts against Neil Magny, Gunnar Nelson, and Mike Perry, that Santiago has a great deal of power behind his punches. Hence, he is a massive threat on the feet.

As per UFC stats, Ponzinibbio lands exactly 5 strikes per minute and absorbs 4.77 strikes at the same time. So Santiago should definitely focus on the defensive aspect of his striking game. If the 36-year-old wants to have a brawl instead of a technical bout, he will be in for a rude awakening. Alex Morono lands 5.36 strikes per minute, which is higher than Santiago Ponzinibbio’s average.

However, with only 6 career KO wins, Morono does not possess the same kind of power. However, with his decent gas tank, Morono can put the pressure on Ponzinibbio and focus on out landing him with a significantly more number of strikes. In both of his last two losses, his opponents got the reward for applying pressure on Santiago Ponzinibbio.

Although he was looking like a great contender before taking the time off, Santiago has never truly recaptured his old self. As a result, he has lost the killer instinct which drove him to finish the fights. Also, at the age of 36, Ponzinibbio is slowing down. Hence, Alex Morono will be the smart pick to win this weekend at UFC 282.