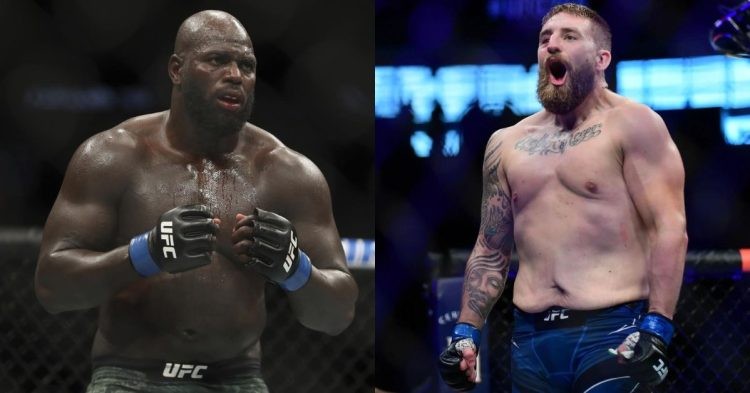 In the prelims of UFC 282, fight fans will see two rising heavyweights collide when Jairzinho Rozenstruik squares up with Chris Daukaus.  Rozenstruik (12-4) is coming off back-to-back losses at the hands of Alexander Volkov and Curtis Blaydes. However, Rozenstruik has significant victories in his career and this weekend he will hope to get back in the winning ways.

Meanwhile, his opponent Daukaus (12-5) is also coming off two losses. He got knocked out by Blaydes and Derrick Lewis and now will look to pick up a win this weekend. He has significant knockout wins and has proved to be a threat inside the octagon.

Jairzinho Rozenstruik is the more experienced fighter, who fought some of the best heavyweights in the likes of Francis Ngannou, Ciryl Gane, Alexander Volkov, and more. Even though he lost all of these fights but certainly he got seasoned while fighting the powerful elites of the division.

Rozenstruik has incredible stoppage victories over Junior Dos Santos, Alistair Overeem, Andrei Arlovski, and more. ‘Bigi Boy’ has demonstrated his ability to finish a fight and is a well-rounded fighter. He has got the power to stop Daukaus early in the fight or take this fight to the judges.

On the other hand, Chris Daukaus has shown that a fight with him will result in someone getting knocked out. Daukaus is an agile and powerful striker with solid boxing. He throws combinations well and has a fairly good ground game.

Daukaus is 3-2 in his last five fights and this weekend he will hope to end his losing streak. However, both fighters are coming off a loss which means we will see both of the heavyweights throwing bombs from the very start or playing a slow-paced game where this fight goes to distance.

Both of the heavyweights have got the power and willingness to put up a slugfest. Rozenstruik is a lot more experienced than Daukaus. He is a puncher who puts out his opponents with one big shot but needs to set up traps and put together good combinations to stop Daukaus.

Meanwhile, Daukaus is superior in the striking department. He is an absolute slugger and also has good cardio. However, he needs to be aware of Rozenstruik’s power. I believe this fight ends in the early rounds with someone getting knocked out. I expect both of the fighters to put a striking battle where Rozenstruik gets the victory with a big powerful shot.