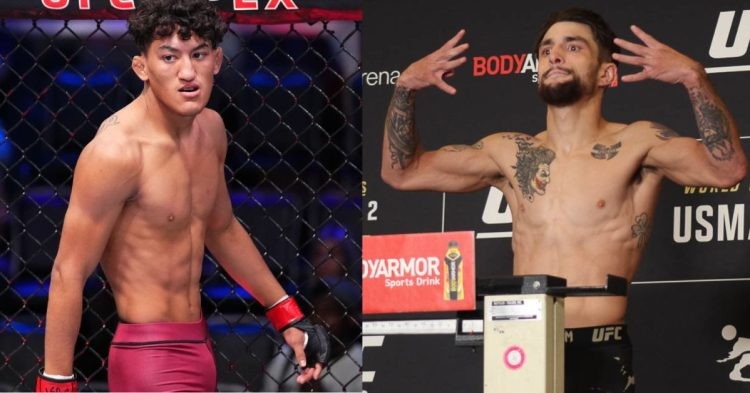 The youngest fighter in the UFC, Raul Rosas Jr. will make his debut against Jay Perrin in the prelims of UFC 282. Rosas Jr. is 6-0 and is coming off a decision win over Mando Gutierrez in Dana White’s Contender Series.

This weekend, the 18-year-old Mexican fighter will hope to win his much-anticipated debut in the promotion. Rosas Jr. is currently undefeated and is expected to become a huge success in the future as he has shown good fighting skills at such a young age.

On the other hand, Perrin will try to stop his opponent’s ascent and derail the hype train of Rosas Jr. Perrin is 10-6 and coming off back-to-back decision losses. He has yet to pick up a win in the promotion and will be desperately looking to get a win this weekend.

Raul Rosas Jr. has a pretty solid resume and won five of his professional fights via stoppages. The young fighter demonstrated good submission skills too, winning four fights via submission. He has pretty solid takedown skills as well and his abilities are getting only better.

However, Rosas Jr. has holes in his standup game and must improve his striking now when he is in an elite promotion. He certainly has power in his strikes but will need to fight technically in this upcoming bout rather than frantically throwing big shots. Rosas Jr. displayed overall good fighting skills and now we’ll see how he fairs in the big league.

Meanwhile, Jay Perrin is in a pretty tough stop as he has failed to pick up any victory in the promotion. His last two saw him falling to Mario Bautista and Aoriqileng and this weekend he needs a desperate win.

Perrin is overall a good fighter and his strength lies in his boxing. In his fight against Aoriqileng, Perrin displayed very good striking and even beat his opponent. Perrin’s resume might put make Rosas Jr. underestimate him, but he definitely is a well-rounded fighter.

Who leaves the cage victorious?

This bantamweight will be an electrifying battle. Rosas Jr. will enjoy a slight height advantage and is superior on the mat. However, this young fighter still needs to improve his striking especially when he is fighting a tough competitor like Perrin.

Perrin has the ability to finish Rosas Jr. if the fight continues on their feet. One thing Perrin must look out for is his opponent’s frequent takedown attempts. Rosas Jr. is a danger on the ground but I expect Perrin to outstrike the young Mexican to get a decision win.