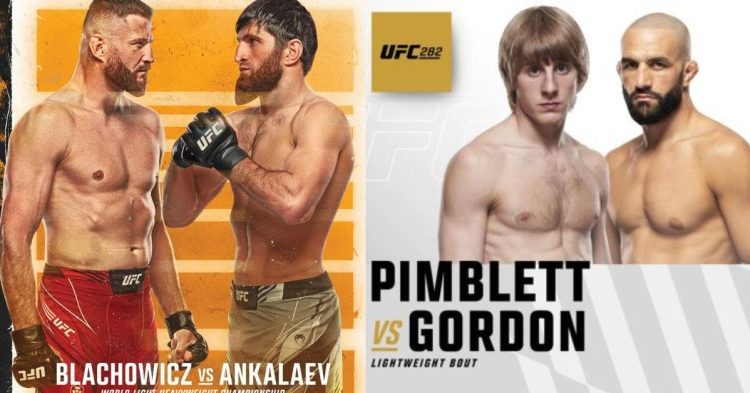 The UFC will return this weekend with the last PPV event of 2022 – UFC 282 which takes place on Saturday, 10th December at T-Mobile Arena, Las Vegas. The main event will feature a light heavyweight title fight between Jan Blachowicz and Magomed Ankalaev.

Previously, the main event was set to be headlined by former UFC light heavyweight champion Jiri Prochazka and Glover Texeira. However, the bout was canceled after Prochazka suffered a brutal shoulder injury last month and then vacated his title respectfully promising to make his return next year.

The main event was rescheduled, and now No. 2 ranked Blachowicz (29-9) will fight No. 3 ranked Ankalaev (18-1) for the vacant title. The main event battle between the two UFC veterans is expected to be electrifying, and the chance of this fight going to the distance is slim.

Apart from the main event, the UFC 282 features an exciting lightweight co-main event between the rising star Paddy Pimblett (19-3) and Jared Gordon (19-5). Pimblett has taken the MMA world by storm in a short time and will hope to bring the heat this weekend while trying to earn his 4th consecutive win in the promotion.

Other than that, the main card features two exciting bouts. In a middleweight bout, Darren Till (18-2-1) will return to action this weekend against Dricus Du Plessis (17-2). Fans will see a featherweight bout between Bryce Mitchell (15-1) and the undefeated fighter Ilia Topuria (12-0). Apart from the main card, UFC 282 features stacked preliminary and early preliminary cards.

When is UFC 282 press conference?

The pre-fight press conference for UFC 282 will be held at MGM Grand Garden Arena. It will be open to the public and fight fans around the world can also catch this event live on ESPN.

Fighters from the main card will be present there including Jan Błachowicz, Magomed Ankalaev, Paddy Pimblett, Jared Gordon, Darren Till, Dricus Du Plessis, and more. Check out the full UFC 282 card below:

Darren Till vs. Dricus Du Plessis

The Main Card of UFC 282 will start at 10 p.m. EST, and the main event featuring Blachowicz vs. Ankalaev will be taking place at approximately 12:15 a.m.