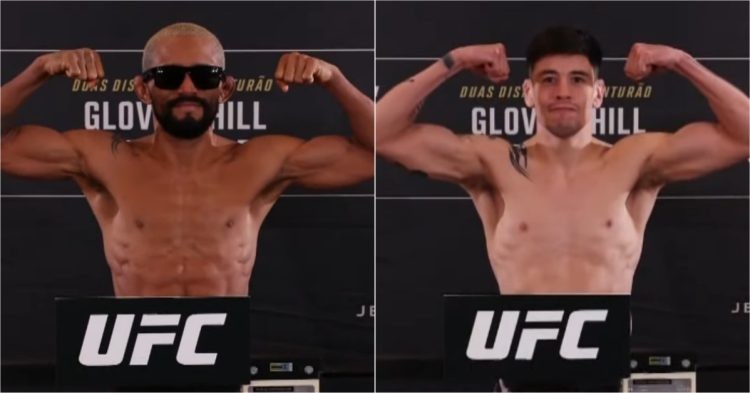 The UFC 283 card comes to fans out of the Jeneusse Arena in Rio De Janeiro Brazil on January 21. Deiveson Figueiredo vs Brandon Moreno is the co-main event for the PPV. This marks the fourth time these men will share an octagon. Their rivalry stands at 1-1-1 heading into Brazil.

Their first bout ended in a draw with Moreno breaking the deadlock in the rematch at UFC 263. Figueiredo defeated Moreno in a close decision victory at UFC 270 to regain his flyweight title.

Deiveson Figueiredo (21-2-1) is one of the best fighters in the UFC’s flyweight division and the reigning, undisputed flyweight champion. He holds 6 victories in his last 8 bouts with one draw and one loss, both to his UFC 283 opponent. Figueiredo has a diverse arsenal that keeps his opponents guessing and sometimes makes them a little scared to commit.

See what Deiveson Figueiredo (@Daico_Deiveson) had to say about fighting Brandon Moreno in the @UFC's first tetralogy and why he believes he'll beat Moreno at #UFC283 ⤵️:https://t.co/5YpeLSbhL9

Brandon Moreno (20-6-2) is the current interim flyweight champion. He earned that honor after he defeated Kai Kara-France in an impressive manner at UFC 277. Moreno has 5 victories in his last 8 fights with 2 draws and one loss. He is a well-rounded, technical fighter with very few holes in his game.

Deiveson Figueiredo vs Brandon Moreno is a difficult fight to accurately predict. These men have fought each other 3 times with each match being as close as the next. Moreno has the physical advantage over Figueiredo. He is taller than his Brazilian counterpart and has a 2-inch reach advantage over him.

They are neck and neck in almost each metric used to measure a fighter’s proficiency. The only stats with notable gulfs are the KO percentage and submission finish percentage. Figueiredo has finished 43% of his fights by KO/TKO, more than doubling Moreno’s 20%. Ultimately, the edge in power and offensive striking certainly goes to Figueiredo who also has more knockdowns every 15 minutes than Moreno.

However, the interim champion does have better defensive skills on the feet with lesser significant strikes absorbed. Moreno also attempts more strikes in every match and throws more volume than Figueiredo. The battle on the feet seems like it favors Figueiredo.

However, the Mexican flyweight is better at defending takedowns than Figueiredo. He also took down Figueiredo seven times in their last 3 fights. Moreover, the interim champion does hold more submission victories than the Brazilian, so the battle on the ground favors Moreno more than the undisputed champion.

Despite these facts, Figueiredo’s age and his weight-cutting difficulties will also likely play a part in deciding the match’s winner. The Brazilian also hasn’t fought in nearly a year. And Moreno is coming off an impressive interim title win. This would tip the odds slightly in favor of the younger man, Moreno, who is riding on a lot of momentum heading into UFC 283.