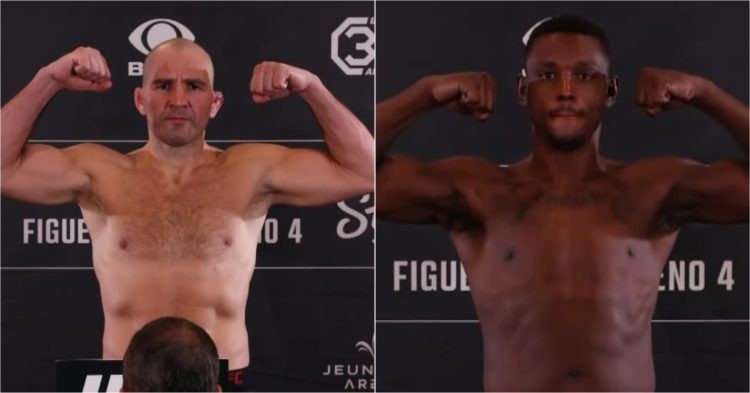 Glover Teixeira is set to fight Jamahal Hill to recapture the light heavyweight title in the main event of UFC 283. Teixeira was originally scheduled to take on Jiri Prochazka for the LHW championship in a rematch of their UFC 275 barnburner. However, Jiri was forced to pull out of the bout due to a devastating shoulder injury.

He also vacated the LHW belt. The co-main event for UFC 282, Magomed Ankalaev vs former champion Jan Blachowicz was promoted to the main event with the vacant title on the line. However, that bout ended in a draw and Glover Teixeira vs Jamahal Hill was made for the title.

Jamahal Hill (11-1) will be competing in his first title fight at UFC 283. He is coming off a TKO win against Thiago Santos, with a 3-fight win streak. Hill is yet another UFC fighter who earned a contract through Dana White’s Contender Series.

Over the course of his fledgling career, Hill has beaten the likes of Johnny Walker, Thiago Santos, and Ovince Saint-Preux. His only professional MMA loss came to Paul Craig over a year and a half ago.

Whereas, Hill’s opponent, Glover Teixeira (33-8) is a veteran of the sport. He became the oldest fighter in UFC history to win a title after he defeated Jan Blachowicz at UFC 267 for the LHW championship.

Teixeira’s most recent bout was the title fight against Prochazka at UFC 275. The bout is widely considered to be one of the best title fights in UFC history. However, that takes nothing away from the fact that Teixeira is 6-1 in his last 7 fights.

The UFC 283 main event is a clash of styles that is a mainstay in MMA. Glover Teixeira is a terrific grappler who takes down his opponents, keeping them there and finishing the fight with either ground and pound or a submission. Whereas, Hill is predominantly a striker, fighting mostly as a southpaw.

Naturally, if the fight remains standing up, the fight is Hill’s to win. Jamahal Hill lands nearly twice the number of significant strikes per minute relative to Teixeira. He also averages 1.03 knockdowns every 15 minutes compared to Glover’s 0.37. Hill is also taller than Glover with a 3″ reach advantage over him.

However, Glover has one weapon for which Hill seemingly has no answer. Despite having solid takedown defense, the fight is as good as over if Teixeira is able to get Hill down. Teixeira averages 2.2 takedowns every 15 minutes compared to Hill’s 0. Glover has also ended 30% of his fights by submission. Despite Hill showing his grappling training on the UFC Embedded Series, he is simply no match for the wily veteran’s ground game.

The 43-year-old former champion will also have the crowd’s support considering the card will air out of his home country, Brazil. The stars seem to have aligned for Glover to break his own record and once again become the oldest UFC champion. And if he can get Hill down, he will be able to call himself champion once more.