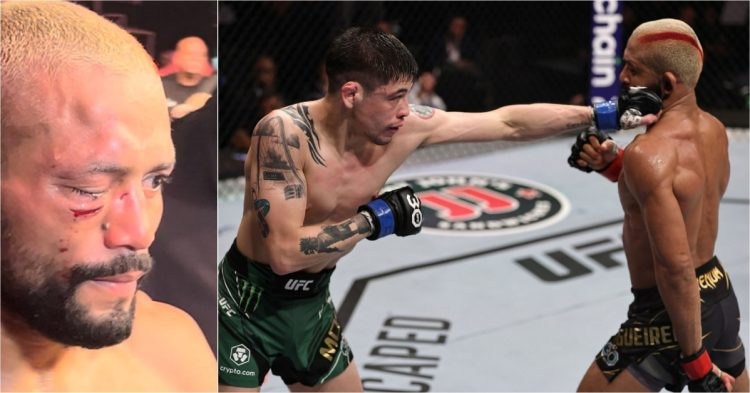 Glover Teixeira was set to fight Jamahal Hill in the UFC 283 main event fight. However, the fight that the fans were the most excited about was the co-main event between Deiveson Figueiredo and Brandon Moreno. Fans expected a thriller between the two as their previous three clashes were some of the best fights in the division. However, there was an anticlimactic finish to the much-anticipated contest.

Both fighters knew each other very well after sending 75 minutes in the Octagon together. So it was understandable that neither wanted to push the pace early. Although Figueiredo managed to lock in submissions throughout the first two rounds of the fight, Moreno always seemed the fresher fighter. Figgy landed 24 strikes in total (19 significant) and Moreno managed to land 85 (48 significant).

So it shows that The Assassin Baby was much busier and wanted a finish. Although he got the stoppage, it was perhaps not the kind he was hoping for. In round 3, Moreno landed a huge punch on The God of War and something immediately seemed off. Deiveson protested right away and held his eye in pain. But the ref deemed the punch legal and did not stop the contest.

Upon further inspection, it turned out that the ref was right. Although Moreno’s finger did graze Figgy’s eye, the punch which caused the damage, was legal. The strike seemed to affect the champ’s vision as he spent the rest of the remaining third round on his back. After the conclusion of the round, the doctor inspected Figgy’s eye and deemed the 35-year-old unfit to continue.

As a result, the ref had to call the fight and Moreno ultimately won the fight via doctor’s stoppage. He now holds 2 wins over the Brazilian fighter and is once again the undisputed UFC men’s flyweight champ.

Deiveson Figueiredo thinks Brandon Moreno poked him in the eye

Although Brandon Moreno was ecstatic about the win over his arch-rival, his celebrations were quite muted. In his post-fight interview, the 29-year-old was empathetic towards fans and Deiveson after such an underwhelming end to one of the best series of fights in UFC history. Figueiredo also took the mic after the fight. As previously promised, Figgy said that he will move up to bantamweight after failing to defend his 125lbs title.

He also commented on the eye poke situation. Figgy added, “You know, it’s Brandon’s night. I felt the eye poke, I thought it was an eye poke. But there’s not much I can say. Hopefully, I don’t have any lasting problems with my eyes.”

What do you make of the situation? Do you think the referee should have stopped the fight to let Deiveson recover? Let us know in the comments down below.