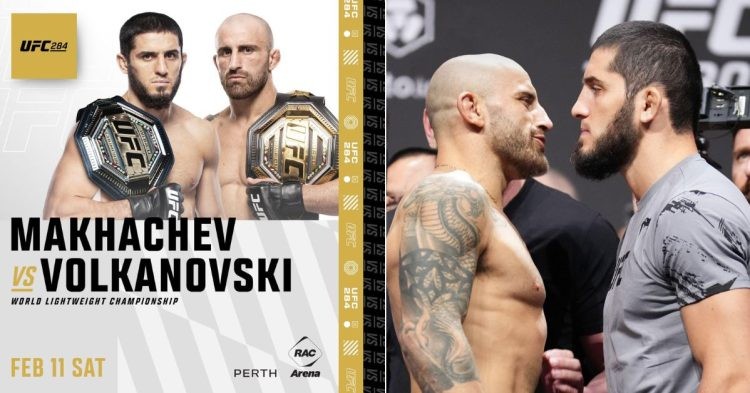 UFC 284 goes down on February 12 inside Perth’s RAC Arena in Australia. The much anticipated UFC PPV features the return of Australia’s favorite Alexander Volkanovski, who will go head-to-head against Islam Makhachev in an attempt to become a two-division Champion. Islam Makhachev will enter the UFC Octagon in his first title defense.

UFC 284 will feature another exciting match-up as the featherweight division moves forward in the absence of Volkanovski with Josh Emmett and Yair Rodriguez set to throw down for the interim featherweight gold. UFC’s last event in Perth took place back in February of 2018 at UFC 221: Romero vs Rockhold.

Former UFC Middleweight Champion Robert Whittaker also returns to action as he takes on Paulo Costa at UFC 284. Whittaker is coming off a dominant decision win over Marvin Vettori, while Costa picked up a decision win over Luke Rockhold in his last fight.

Tickets for UFC 284: Makhachev vs Volkanovski went on sale on Friday, November 18. Fans can purchase tickets for UFC 284 at ticketek.com.au. One person can buy up to six tickets. Fans will have to pay a one-off transaction fee of $7.40 alongside the ticket price which is valued in the excess of $200 – $5000. RAC Arena in Perth has a capacity of 15,500 people.

There’s an exclusive opportunity for UFC Fight Club members, who can buy tickets to UFC 284 through www.ufcfightclub.com.

How to stream UFC 284: Islam Makhachev vs Alexander Volkanovski live?

Fans in the United States can watch UFC 284 live on ESPN+ and UFC Fight Pass. The main card will commence at 10:00 p.m. ET on Saturday, February 11. Safe to say, the main event will take place after midnight on February 12.

Meanwhile, for fans in New Zealand, UFC 284 main card will kick off at 4:00 p.m. NZT. The UFC PPV will stream live on Sky Sports and Spark for the Kiwi fans.