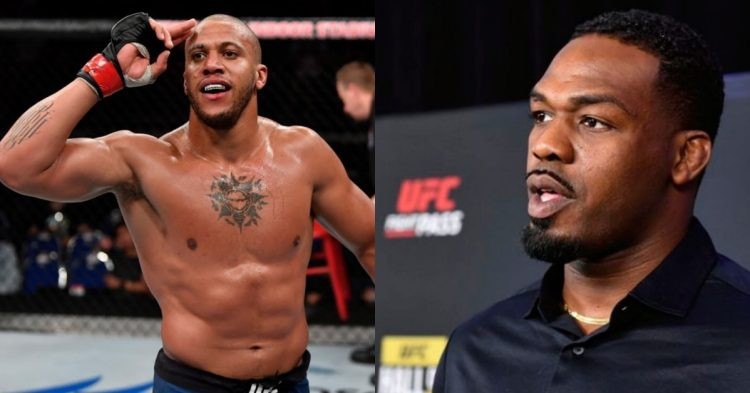 Is Ciryl Gane the favourite over Jon Jones? (Images via Twitter)

Jon Jones is ready to make his heavyweight debut later this year. At the moment it seems like he will either fight the champ Francis Ngannou or Stipe Miocic. However, one name that has recently entered the conversation, is Ciryl Gane.

Gane took on Francis Ngannou at UFC 270 for the UFC Heavyweight Championship. Ngannou had a bad knee injury ahead of the fight in January this year. Hence, a lot of pundits thought he would be a massive favourite to become the next heavyweight champ. But against all odds, Ngannou defeated Gane. Not only did he beat Gane, but Francis also used wrestling to get the job done.

It made some fans on Twitter wonder about what a potential fight between Jon Jones and Ciryl Gane will look like. Jones is one of the best wrestlers in the UFC right now. Hence some fans think Jones will rag-doll Gane with his wrestling if the fight comes to pass.

People let their hate for Jon Jones blind them. Gane just got wrestled by Francis who is not a wrestler. Jon would take down Gane and dominate him. No disrespect to Gane at all. https://t.co/9ekd5v5rU2

Jon jones can wrestle extremely well with a collegiate background and has some of the highest level technical striking development we’ve ever seen in the sport, let’s not get ahead of ourselves lol https://t.co/hmuhRcSJSK

However, there is a portion of fans who think Gane will outstrike Jon on the feet. In his last fight in 2020, Jones fought Dominick Reyes in the main event of UFC 247. Although Jones won the bout via unanimous decision, the verdict was widely panned. The majority of the fans and pundits scored the bout in favour of Reyes. Some fans think Gane will be able to replicate what Reyes did.

Jon Jones got beat and out-struck and by Dominick Reyes, but people will tell you with a straight face that he beats Gane 💀#MMATwitter

Hot take: Jones would lose 50-45 to Gane at HW. His absolute worst match up in that division currently. pic.twitter.com/XUYByAESAV

Jon Jones is considered by many the greatest Mixed Martial Artist of all time. Although his striking is very refined, Jones’ wrestling is the most feared aspect of his game. In his 28-fight career so far, Jonny Bones has 6 submission wins. He has submitted the likes of Vitor Belfort, Lyoto Machida and Ryan Bader.

The 34-year-old averages 1.85 takedowns per fight with an accuracy rate of 44%. Jon’s numbers speak for themselves. However, things have taken a turn for the worse in recent times. Since coming back to the UFC in 2018, Jon has only secured 6 takedowns in 4 fights. But his bout against Dominick Reyes was the most talked-about one.

In that fight, Jon attempted a total of 9 takedowns, but only found success twice. He was also outstruck by Reyes. Reyes landed 116 strikes in the fight which was 8 more than what Jon managed. It made the fans wonder whether father time has caught up with Jon or not.

Prior to fighting Ngannou, Gane held a 100% takedown defence. Although Francis secured 4 takedowns, it can be attributed to the champ’s much bigger physical frame. Hence, it begs the question, can Jones do to Gane what Francis did at UFC 270?

Jon is 6ft 4inches tall and holds a reach of 84.5 inches. In comparison, Ngannou stands at 6’4 too but lacks 1.5 inches in reach (83 inches). But Ngannou weighs close to 265lbs which helped him in his effort to take Gane down. But the French fighter is not a small man himself, he stands at 6’4 and has a reach of 81 inches.

Reyes had a physical frame that was much closer to what Gane had. Dominick is 6ft and 4inches tall with a reach of 77 inches. Jon found it hard to take Reyes down. But one thing that the fans will have to keep in mind is that the Reyes fight was at 205lbs. Since then Jones has bulked up significantly. Will it help his wrestling at heavyweight? Only time will tell.

Six Tennis Stars Who Have Beaten the Big Three, Federer, Nadal and Djokovic, To Win Grand Slams Since 2006