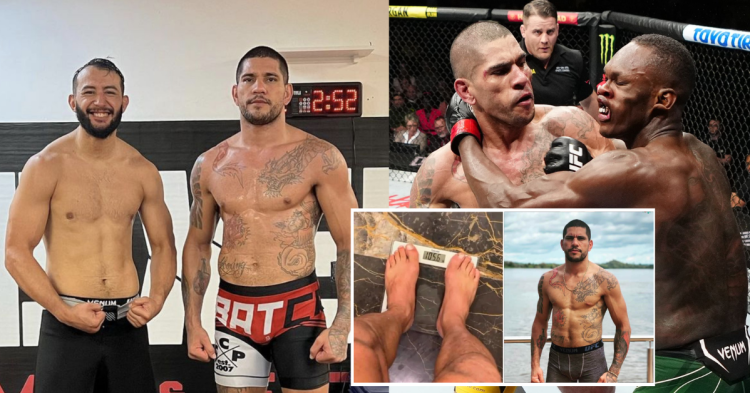 There’s always some sense of mystery behind a UFC fighter’s weight. While the division they compete in will tell you their weight, it won’t be wrong to say that it’s only exclusive to the “weigh-in day”. As for real weight, it is a completely different story. No wonder, a lot of UFC fighters appear heavier and bigger than their opponents in the same division. The difference is so stark that the word “natural weight” also exists in the realm of combat sports.

Alex Pereira has revealed that he weighs 210 lbs on fight day. Poatan weighed in at 185 lbs on the official scale in the lead-up to UFC 281.

Alex Pereira shocked the world when he stopped Israel Adesanya back at UFC 281 to become the new UFC Middleweight Champion. Alex Pereira’s emphatic win over the Styebender earned him praise from all over. However, in the midst of a historic win, a lot of credit was taken away by the argument that was leveled at Alex Pereira’s real weight.

Joe Rogan’s comments also received wild reactions from fans after the UFC Commentator seemingly lauded Israel Adesanya for not cutting too much weight, compared to Alex Pereira who he believes weighs more than a light-heavyweight in the UFC. He even went on to call it “sanctioned cheating” on Pereira’s part, inviting a sharp response from Chael Sonnen.

There’s no discrediting the advantage of weight, that’s why the different divisions exist in the first place. However, to say that a fight can 100% benefit from cutting a lot of weight, then that wouldn’t be a fact but merely an opinion. While a lot of fighters have gained huge success, others have suffered due to horrible weight cuts. Alongside all of this, there are a lot of fighters who have also missed weight.

Alex Pereira seems to be on the right side in all of them. He has never missed weight and has conducted himself professionally. And with a weight exceeding the light-heavyweight limit on fight day, he seems to be faring well against fighters with the speed and movement of a middleweight. Amidst all of this, he has also managed to hand Israel Adesanya, the first stoppage loss of his mixed martial arts career.