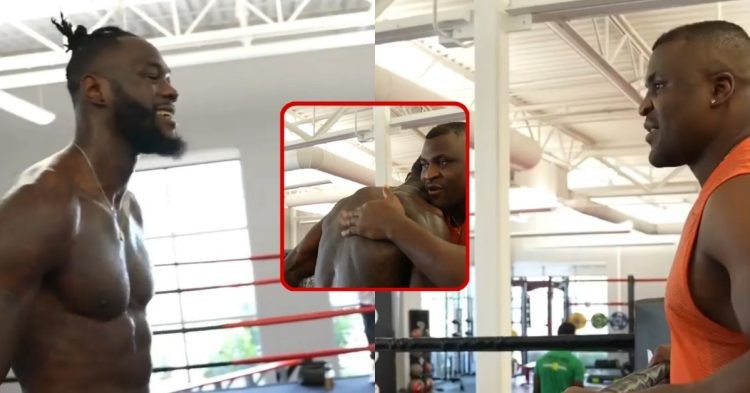 Francis Ngannou is currently in rehab after going through a major knee injury. The Predator was in action in January of this year as he defended his heavyweight belt against Ciryl Gane at UFC 270. But he is not likely to fight again this year. So he was most probably present in the gym to do some light training to prepare himself for a potential return early next year.

Deontay Wilder, on the other hand, is coming off two bad losses against Tyson Fury. They had one of the best trilogies for the WBC heavyweight title in recent memory. Although Wilder lost the last fight via knockout in the 11th round, he dropped Tyson multiple times in the fight. It earned him a lot of respect amongst the fanbase.

Following the fight, there were rumours that Wilder would retire after two high-profile losses. However, there have been some recent reports suggesting that he was planning to make a comeback to the ring. The footage of him working out seems to confirm that he is not done with the sport.

This footage of Francis Ngannou and Deontay Wilder linking up is very significant. Ngannou and Tyson Fury have been going back and forth for a long time about potentially having an exhibition showdown. Although Tyson seemingly retired after beating Dillian Whyte, he brought Ngannou to the ring and promised to fight him.

However, the ruleset of the potential contest is yet to the determined. But fans can expect to see a hybrid of boxing and MMA. Although Ngannou does not require much training on the MMA side of things, he does need an elite sparring partner to improve his boxing skills. And who is better than Deontay Wilder as a sparring partner?

Wilder has already fought Fury three times and had moments of huge success. Hence, Ngannou will be smart to bring him in as the main sparring partner. At this moment, it seems like Ngannou’s next fight will be inside the UFC Octagon and Jon Jones is probably going to be his next opponent.